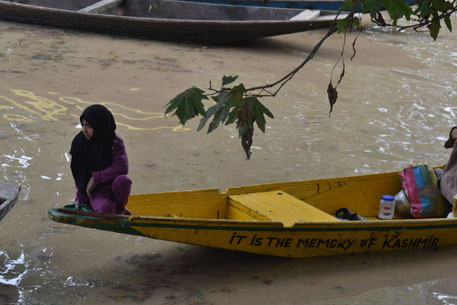 Reports of fresh rainfall in western Jammu and Kashmir have given rise to panic among Kashmiris. People are already reeling under crisis after flood water inundated homes in several parts of the state following Sunday’s incessant rains.

Meteorological department director Sonam Lotus told Down To Earth that the state would receive moderate to heavy showers from Wednesday to Friday. Despite heavy rainfall, the water level of Jhelum continued to fall since Wednesday morning.

Meanwhile, in a bid to assist the people, the police department has set up a 24-hour helpline which has received more than 30,000 calls after it was started on Sunday.

“Our helpline has also received 9,454 WhatsApp messages, including pictures,” a police spokesperson said. “It is a way (setting up the helpline) to stay connected with the people and be aware of the ground situation.”

Flood-affected people are calling up on the number to enquire about the situation. “I called up the police helpline number to ask about updates. We fear that flood water might inundate our houses again, as there is a fresh forecast of rainfall,” Aijaz Rasool, a resident of Bemina, Srinagar, said.

Following the forecast, the government has issued a warning, urging people to take precautionary measures. “Incessant rains and melting of snow coupled with the rise in temperature have increased chances of landslides and erosion in all areas which are steep and hilly,” an official handout read.

“The weather outlook from April 1 to April 3, 2015 may further aggravate the situation,” the handout said. People living in the upper reaches of Shopian in southern Kashmir have been asked to take precautionary measures to avoid mishaps and loss of life.

All schools and colleges remained closed on Wednesday.

The Jammu and Kashmir state board has postponed all examinations scheduled till April 4 in the Kashmir Valley and the winter zones of Jammu division.

Till now, the Centre has sanctioned Rs 200 crore for immediate rescue and relief operations in the state. “The situation is not as grave as last time. But we are fully alert and if required we will send more assistance,” Union Home Minister Rajnath Singh said.

Former chief minister, Omar Abdullah, has expressed hope that the Centre would release the relief package asked by his government after last year’s flood without any delay to help the state government.

“Elections were held despite the floods last year and then we were told that it was done in order to start relief, rehabilitation and infrastructure developing process. Neither flood relief reached the people nor infrastructure has been developed,” Abdullah said.

Earlier, Minister for Law Justice and Parliamentary Affairs Syed Basharat Bukhari had said that the state government was pursuing a Rs 44,000-crore package for flood-affected people with the Centre. He said relief had been provided to the kin of the deceased and to the owners of damaged structures through SDRF and the Chief Minster’s Relief Fund.

“An amount of Rs 118.90 crore has been paid to 16,199 families under PMNRF (Prime Minister’s National Relief Fund),” the minister said.

He added that a Special Plan Assistance of Rs 1,000 crore has been set up in the annual plan of the current financial year for permanent restoration of damaged public infrastructure.

“The state government and the World Bank have carried out a comprehensive need assessment for reconstruction. ... the bank has indicated its willingness to provide Rs 1,500 crore for reconstruction work in key infrastructure sectors,” Bukhari said in the House.

“In the first phase, we will work for the restoration of livelihood for small businessmen and destitutes with no insurance cover while in the second phase, the focus will be on private and public assets and clearance of liabilities,” Sayeed said.
“The third phase will address the restoration of public infrastructure.”

Union Minister of State for Minority Affairs Mukhtar Abbas Naqvi, who was sent to monitor the flood situation in the Valley by Prime Minister Narendra Modi, has submitted his report. It reads that funds provided after last year’s floods had not been utilised properly.

Naqvi presented his report to Modi after touring the flood-affected areas of Srinagar and Baramulla and holding meetings with army and state government officials. He said an action plan should be prepared by the state government, outlining a permanent solution to the problem.