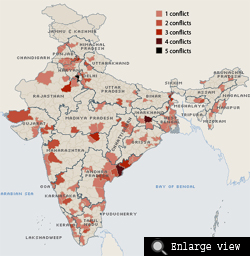 Disputes over land rights, which have turned violent in recent years with communities taking on authorities, are set to rise India. Land requirement for industrial projects in India are set to be triple in the next 15 years, and with this conflicts over land acquisition are going to increase, according to a new study.

Currently, close to 22,000 sq km land is devoted to projects in agri-business, infrastructure, mining and non-conventional energy sectors. This will increase to 61,653 sq km by 2026, which is close to double the size of Kerala. Most of the land taken over by industries is common land and forests, traditionally used by communities. According to the research conducted by non-profits, Rights and Resource Initiative and Society for the Protection of Wasteland, 130 out of the total 610 districts of the country have been embroiled in conflicts in the past 10 years due to takeover of common lands and forests (see the map). The conflicts have accelerated in the past two years.

The report, through case-studies in six different states, shows how the governments and industries are subverting the rights of the people to acquire common land on a large scale. It says that enforcing and strengthening the laws such as the Panchayat (Extension to Scheduled Areas) or PESA Act of 1996 and Forests Rights Act (FRA) of 2006, that recognise protect the rights of tribals and other local communities over common land and resources they have been using traditionally, are necessary to end the land and forest conflicts across the country. A fact sheet based on the study: