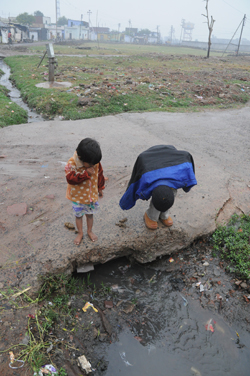 Plaintiffs in a lawsuit against Union Carbide Corporation (UCC) for the Bhopal gas tragedy have released new evidence that allegedly demonstrates the chemical company’s direct role in designing and building the pesticide plant in Bhopal, India. Leakage of a deadly poisonous gas from the plant in 1984 caused the worst industrial disaster in modern times.

The new evidence was submitted in the Southern District Court of New York in January in the case, Sahu II v. Union Carbide Corporation, a federal class-action lawsuit filed by residents of Bhopal where land and water continue to be contaminated by waste that was released from the now defunct chemical plant. A previous lawsuit—Janki Bai Sahu I v Union Carbide, 04-cv-08825— was dismissed last year after a US court found insufficient evidence against Union Carbide. Union Carbide and its former chairperson Warren Anderson were found “not liable” for environmental remediation or pollution-related claims made by gas disaster survivors near the plant.
Union Carbide, now a Dow Chemical subsidiary, has refused to clean up the site claiming that its former Indian subsidiary (Union Carbide India Limited) bears sole responsibility.

“The victims, recently, also sued Madhya Pradesh government, which leased the land on which the plant was built, for permitting clean up of the contaminated site which has polluted the drinking water supply of nearby residential areas. The state government has made no provisions for proper disposal of waste,” according to a release by EarthRights International, a US-based non-profit.

The new evidence, consisting of statements from former Union Carbide and Union Carbide India employees, as well as evaluations by experts in waste disposal systems, establishes that the design used by UCC for the plant and its waste management system was faulty and has caused the ongoing toxic waste problem in Bhopal.

The evidence also shows that it was a Union Carbide employee who oversaw and approved construction and design of Union Carbide’s plan for the plant.

“This evidence demonstrates that Union Carbide was intimately involved in every aspect of designing and building the Bhopal plant, including the waste disposal systems,” said Rick Herz, counsel for the plaintiffs and litigation coordinator for EarthRights International, a US-based non-profit.

Co-counsel Rajan Sharma, of the New York law firm Sharma & Deyoung, added, “These families have been living with Union Carbide pollution for decades and they deserve justice.  Union Carbide has refused to submit to the jurisdiction of India’s courts and asserts that American courts may not grant relief without the participation of the Indian government.”
The plaintiffs have also sued Madhya Pradesh, which now owns the Bhopal site, to compel its cooperation in the cleanup of the contamination.  As of today, neither the Government of India nor the State of Madhya Pradesh has appeared before the US court.

The Sahu II lawsuit is No. 07 Civ 2156 in the Southern District of New York. In addition to EarthRights International and Sharma & Deyoung LLP, the plaintiffs are represented by the Law Offices of Curtis V. Trinko.