China goes ahead with dam construction, while both countries classify hydrological data in the name of national security 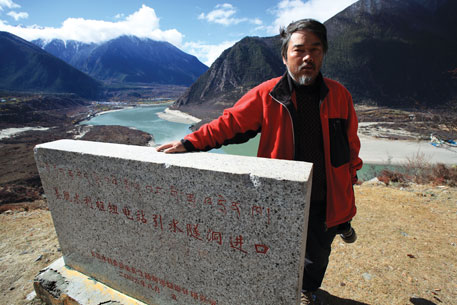 Prime Minister Manmohan Singh reiterated to Chinese premier Li Keqiang on May 20 that it would be useful to include information on upstream development projects of shared rivers. The Chinese are unwilling to budge, only saying they would not do anything in the upper reaches of the Brahmaputra to harm relations between the two countries. Although the two heads of state and the delegations did not take a final decision on this issue, they did however renew the previous five-year agreement set to expire next month on sharing flood data during the monsoon season. India has sought more information on year round flows given their long-standing concern on reduced flows in the lean season and the fear that China will divert substantial water by constructing dams in the 1,700 kilometre stretch of the Yarlung Tsangpo, as the Brahmaputra is known as it flows in upper reaches in China.

India is seeking a joint mechanism on the lines of the Indus Commission, wherein designated officials from Pakistan and India are connected through a hot line and are mandated to make three visits, each to the other side as a confidence building measure. In the Indus basin, there are 132 monitoring stations where daily discharge data is shared. But between China and India there exists what is called is an expert level mechanism, wherein four to five non-permanent members engage informally on an annual basis, at best. China wants to keep it this way, and India has no diplomatic foothold on the issue. “Language of any draft is theirs, and any decision is always on their terms,” says a senior official from the Indian ministry of water resources on condition anonymity.

In the current five-year agreement on data-sharing, India receives data on flood discharge twice a day from three sites during the period June 1 to October 15. The agreement has now been renewed with two additional hydrological monitoring stations. “This is barely a value addition. The ministry of foreign affairs pays for this data, which is very expensive,” say an official from the water ministry.

Indian officials fear that China has created “good” infrastructure, and that we are “lagging by 15 years”. The road routes are being used by the military, and civilians, and also for carrying and transporting construction material and machinery for dams and hydropower development. This activity is visible on Google Earth. China says the dams they are building will not affect downstream areas as run-of-the river technology does not consume water; the only loss of water is through evaporation and percolation en-route. Unlike the conventional hydel power project, run-of-the river projects do not require large dams and reservoirs, and hence are deemed harmless. In 2010, former environment minister Jairam Ramesh had visited China, and in a press conference stated that the projects would have little impact downstream. Having travelled the water course in China, Yang Yong (seen in picture above), who heads a non-profit Henduanshan, too, says India has little to fear for the current plans are non consumptive in nature. For the future, well nobody can say, he adds. 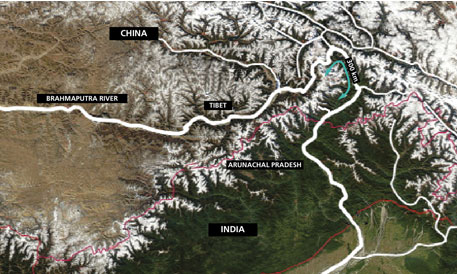 But Indian authorities, too, are very cagey with their data. The ministry of water resources submitted its own Hydro-meteorological Data Dissemination Policy, 2013 earlier this month so that “data collected with the deployment of public funds should be made more readily available to all, for facilitating rational debate, better decision making and in meeting society’s needs”. The policy classified data in to three categories:

The data of category 1 and 2 are classified, whereas category 3 data is unclassified. As per the policy, all unclassified data is hosted online, although most stakeholders apply for this data through the Right to Information Act. There is a provision in the policy whereby classified data can be released for a specific study and is non-transferable. The director of River Data Directorate of Central Water Commission is responsible for placing all such requests along with the recommendations before a Classified Data Release Committee. The minister of water resources is the competent authority to review the policy along with the extent of classified data and procedure for release. In the past, the Indian Institute of Technology-Roorkee has received information on the Brahmaputra, but with a security pledge that the data will not be published or shared in the public domain.

“As a lower riparian on the Indus and the Ganga respectively, Pakistan and Bangladesh have the protection of the Indus and Ganges Treaties. Similarly, there should be a treaty on Brahmaputra between China and India (and Bhutan and Bangladesh). Or perhaps, there should be a Brahmaputra Commission like the Mekong Commission. One doesn't know what is being discussed between India and China, and what China will agree to. The government of India may not make data freely available to people in India, but it has to and does provide Pakistan and Bangladesh the data and information mandated by the Indus and Ganges Treaties, and there are institutional arrangements to ensure this,” says Ramaswamy Iyer, former secretary with the ministry of water resources.

Obtaining information or hydrological data from the government of India is full time job, say activists. “Not just water flow data, the Indian government refuses to share even flood data that it gets from neighbouring countries, and the data that it shares with neighbouring countries,” says HimanshuThakker, convenor of the South Asia Network on Dams, Rivers and People, a Delhi-based non profit. “So Indian government's credibility and moral standing is pretty low on these issues,” he adds.

India’s primary fear has been Beijing’s plans to divert water from the south to the dry north. Tensions heightened with the publication of “Tibet’s Waters Will Save China” in 2005, which detailed routes of the water diversion project through undulating highlands. The Chinese hydrologist Guo Kai in consultation with the country’s water resources ministry wrote the book. Critics, both inside and outside the government, cautioned that the project would cause irreparable damage while China’s former water resources minister Wang Shucheng termed it as building castles in the sky.

India breathed a sigh of relief when news came of a press conference in Beijing on October 12, 2011 where the Chinese vice-minister of water resources Jiao Yong said such a project on the Yarlung Tsangpo river would affect relations with downstream countries. This statement came with an admission that the project had been shelved, as it was neither technically feasible nor environmentally sound. The run of river projects, as the Chinese government claims will not divert any water and will together have a potential of generating 60,000 MW.

Certainly the border row in the western border of China and Ladakh has overshadowed the unresolved water-sharing issues along the Brahmaptura in Monday’s discussions. In the meanwhile, Bangladesh continues to press for a multilateral agreement, while India seems intent on staying passive. The ministry of water resources in China, which publishes hydrological data and water resources information, signed a memorandum of understanding with Bangladesh upon provision of hydrological information in flood season, the same it provides to India.

Perhaps the Indian government is overlooking China’s activity on the Yarlung Tsangpo because India is exercising its own water sovereignty as an upper riparian constructing in the Indus basin, which it shares with Pakistan. India itself has plans to construct 70 large dams on major tributaries of the Brahmaputra before it enters Bangladesh.