Maharashtra elections: Farmers warm up to the idea of guaranteed income

Community youth’s fascination with development, however, is likely to split the farmers’ votes 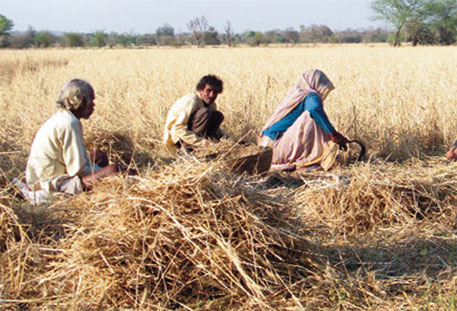 Farmers in Maharashtra are slowly waking up to the idea of an assured income even as the sore issue of minimum support price (MSP) remains absent in the jargon of the impending state assembly elections. Unlike in the general elections this year, political parties and candidates have abstained from making promises on issues related to farming and have focused on the “development” plank instead.

Farmers’ groups, however, have started asking why the MSP has disappeared from party manifestoes this time.

The Aam Admi Party introduced MSP as an election issue during the Lok Sabha elections, when its manifesto promised the setting up of a farmer income commission and assured a minimum income of Rs 1 lakh per annum to every farming family through MSP rationalisation and added income sources. In March 2014, Kisan Swaraj, a federation of farmers’ groups from across the country, had raised similar demands.

The number of farmers aware of this issue is low, and even those who are aware are not equipped to express their demands effectively, say farmer leaders and observers. Farmers’ groups are now slowly coming forward with these demands.

One such group, from Anjangaon Bari in Amravati district, has written an open letter to their election candidates with very specific demands.

They have raised the issue of the fixing of minimum wages for farm labourers equivalent to the lowest pay scale recommended by the National Pay Commission. Net annual income of marginal dry-land farmers, says the charter of demands, should be fixed on a similar scale after taking into account labour costs. The charter also asks for the MSP of different agricultural products to be enhanced to ensure that farmers get this income.

“If these two lowest categories are fixed,” says Rahul Bais, farmer and community leader form Anjangaon Bari, “the benefits will flow to farmers with larger land-holdings and irrigation, and they will in turn earn an equivalent of the higher pay-scale they fit into.”

The idea of a guaranteed income is taking root in other parts of the state as well.

“In our area, this time it is farmers who have forced candidates to talk about cotton and soybean prices,” says Madhukar Dhas of the non-profit Dilasa, which works in the area of drought-proofing in the suicide-prone Yavatmal district. This time, he says, the Congress camp is demoralised, with party members migrating to the BJP in large numbers. “BJP and NCP – the two dominating parties here – had both started their campaigns with other issues, but local candidates were soon forced to talk about MSP because farmers wanted answers,” he adds.

In Wardha, farmer leader Vijay Jawandhia of the Shetkari Sanghatana says that farmers are now very enthused about the idea of an assured income. “We have suggested a per-acre (one acre equals 0.4 hectare) approach to income calculation,” he says. “Beginning with labour cost, which makes for a secure income for labourers, we suggest that MSP be worked out in a way to ensure a guaranteed per acre income. This will take care of both small and big farmers,” he says.

Prime Minister Narendra Modi’s development promises still have takers among the young in the farming community. “The young, educated sons of farmers are hugely taken by Modi’s promises of development and jobs because they don’t want to continue farming,” Jawandhia says.

According to him, this section of voters is attracted to the ideas of huge foreign investments and flamboyant development projects. This is likely to split the vote of farmers and Jawandhia fears that the demand for guaranteed income is not likely to influence the current elections. “However, in view of the future of the community, this awareness is an important phenomenon and should not be underestimated,” he says.