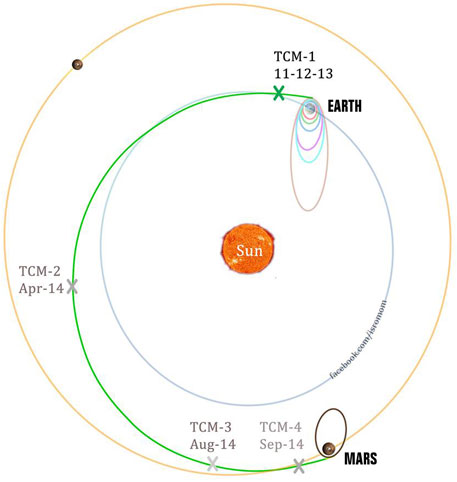 ISRO's orbiter to Mars is now out of Earth's sphere of influence and has entered the Sun's sphere of influence. The organisation has indicated when it would carry out the course correction manoeuvres or trajectory correction manoeuvres (TCM) which would ensure that the orbiter does not stray from its path and reaches Mars' orbit. Four such manoeuvres are planned. The first would be on December 11, followed by manoeuvres in April, August and September next year (see diagram). The manoeuvres would be carried out by firing engines on board the man-made satellite.

The orbiter has a very small window of opportunity to enter the sphere of influence of Mars and such course correction manoeuvres would ensure that this injection happens without a problem. In the heliosphere, it is more or less moving as a free floating object in the predestined direction.

ISRO's Mars orbiter was launched a month back on November 5, from Sriharikota, Andhra Pradesh. After orbiting around the Earth till November 30, it was catapulted towards Mars in the early hours of December 1. On December 2, it crossed moon and became the first Indian satellite to venture that far. By the night of December 3, the orbiter was more than 925,000 km away from Earth. Earth's sphere of influence officially ends at this point. Orbits of the moon and all the artificial satellites of Earth fall inside this sphere.