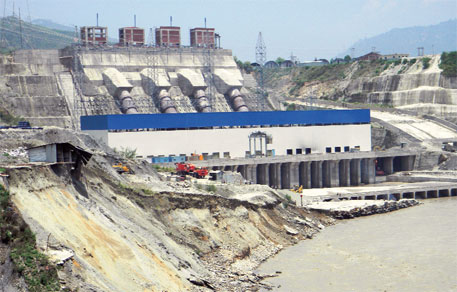 THE future of two hydropower projects in Uttarakhand has become unclear after a Ministry of Environment and Forests (MOEF) expert panel submitted its report to the Supreme Court last month. The report says MOEF’S decision to give clearances to the Lakhwar and Vyasi projects in February this year is a violation of an apex court order in August last year that called for a ban on hydropower projects in the state.

The Uttar Pradesh Irrigation Department had started an integrated Lakhwar-Vyasi project in the 1980s after taking environmental clearances. The project was shelved in 1992 because of financial crunch and accidents. Later, the Uttarakhand Jal Vidyut Nigam Limited decided to split the project into two and approached MOEF for fresh clearances. The ministry gave a nod in February this year saying the two projects were not new and only the implementing agency had changed.

Talking about the clearances, the report says, “This (the clearance) is in violation of the spirit of the Hon’ble Supreme Court’s order of August 13, 2013. It is also noticed that these projects were approved more than 25 years ago. Consequently, they do not have any EIA/EMP (environmental impact assessment and environment management plan) studies that are mandatory today.” The 300-MW Lakhwar and 120-MW Vyasi hydropower projects are located in the Upper Yamuna River Basin in Dehradun district.

The expert panel has also said hydropower projects were responsible for the large-scale floods and landslides in Uttarakhand last June. The panel was set up after a directive by the court asking for a committee to determine role of hydropower projects in the catastrophe that claimed over 5,000 lives in the state.

The panel, in its report submitted to the court on April 18, has recommended a complete overhaul of the environment clearance policy for hydropower projects in ecologically sensitive areas. “All projects > 2 MW, which entail tunneling, barrages and construction of reservoir, shall require prior Environmental Clearances from MOEF and subsequently, such projects falling in the eco-sensitive zones of notified National Park and Wildlife Sanctuaries of Uttarakhand should take prior permission from National Board for Wildlife (NBWL)... Construction activities in all under-construction HEPs (hydel projects) which have failed to obtain clearance from NBWL must come to a stop immediately till such clearance is obtained and considered by expert appraisal committee,” the report states. Earlier, projects with capacity of more than 25 MW needed environment clearances. The panel report has also called for the setting up of an independent authority to commission EIAs.

The report says hydropower projects should not be allowed in areas that are located at altitudes higher than 2,200 metres in Uttarakhand. The panel observes that since environmental flow (minimum flow in the river required to sustain ecology) is less in Uttarakhand rivers, it should be ensured that a minimum of 50 per cent flow in the lean season and 30 per cent during the non-monsoon periods is maintained.

The panel report has surprised environmentalists who were questioning the credibility of the panel as it included several government officials who were responsible for hydropower clearances in the state. “The final report which came out despite so many dissenting voices and in such short period of time shows how serious the issue of hydropower projects in Uttarakhand is. But, it leaves a lot to be interpreted by the court of the ministry,” says Manoj Mishra, convenor of Yamuna Jiye Abhiyan. In fact, it has also made the ministry jittery. MOEF on May 7 asked the apex court to form another panel to review the report. The court, however, asked the ministry to give reasons why it wants another committee. The matter will be heard in July.

Uttarakhand has the second highest hydropower potential in the Himalayan states after Arunachal Pradesh. The state has been pushing hard to achieve an ambitious programme of developing 450 hydel projects to harness its potential of 27,039 MW. The expert panel says several hydel projects are situated in eco-sensitive zones and in the vicinity of national parks and sanctuaries.