Montreal Protocol: India and others block discussions on HFCs 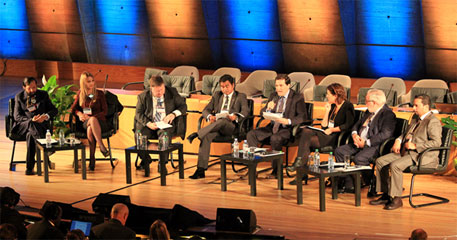 The 26th Meeting of Parties (MOP) to the Montreal Protocol closed amid high drama last Friday. Earlier, towards the end of Wednesday, it seemed like there would be some sort of consensus on formation of a formal contact group that would discuss hydroflourocarbons (HFCs).  But by Friday evening, there was no clarity if discussions of phase-down of HFCs will discussed under Montreal Protocol after India, Pakistan and other countries did not agree to the formation of a contact group while reiterating old concerns.

India had not initially disclosed whether it was in favour of HFCs (used in refrigerants) being discussed under Montreal Protocol on ozone depleting substances   or wanted to retain its earlier stand that it should be discussed only under Kyoto Protocol  because of its high global warming potential or GWP (see ‘India might agree to discuss HFCs under Montreal Protocol’). After staying tight lipped for the first couple of days, the Indian delegation finally made its position clear through the statement of Environment Minister Prakash Javadekar.

The minister in his speech said there were certain points that he would like to see discussed before the debate on HFCs is taken to the next level. He requested that the Technological and Scientific Assessment Panel (TEAP) should submit reports that give conclusive data (not estimates), and a demonstration project on alternatives to HFCs in every state in India that bears in mind the energy efficiency aspect of HFCs and their affordability. He urged the research bodies and developed countries to initiate collaboration to make the alternatives to HFCs more cost-effective.

Apart from the general frustration at the plenary meetings, where the issue was raised often, behind the scenes negotiations that went on between US and the various delegations failed to yield any result. The broader mood in Paris was not that of denial anymore it would seem but that of deferring the issue until further notice and to keep the pressure from developed countries at bay.

After much deliberations as to what to discuss and how to structure the negotiations, parties agreed to hold informal discussions on HFCs on Friday morning, where Pakistan, India took on an active role to block any efforts to set up a contact group. As the day advanced and the possibility of a contact group seemed to become bleak, the US government issued a “conference room paper” (CRP). For a big-ticket item like HFCs this was too little and too late. There were many procedural questions on the conference room paper. At 6 pm on Friday, many countries were unclear about the implications of agreeing to discuss. It was unclear whether such a move was legally within the mandate of Montreal Protocol. What was put forth was not legally binding; it simply aimed at a political agreement that hits the main elements of HFC discussions. This scaling back of US ambitions on the HFC amendment allowed everyone to reset expectations for what can be accomplished.

But like always, the devil is in the details, so when the CRP was being discussed, countries recanted their old concerns. A couple of breaks were called when the countries could step out and flesh out their concerns with the CRP. India, Pakistan and Iran clung dearly to their stands of not allowing this to dovetail into a contact group.

The CRP initiative proved futile as amendments did not go through and there is no end in sight for this fight. What was ultimately decided was that there will be an extraordinary meeting followed by a workshop that will discuss the technical and financial issues over three days in April. It is very hard to spot a silver lining in this because, if one were to be realistic. If it was difficult to  pass even an amendment at the plenary during MOP 26, do we then dare to hope that April discussions will yield any positive step? Between Paris 2015 (when the new climate agreement is expected to be signed) and now, we have the about three more meetings of the Montreal Protocol as a forum to discuss the phase-down of HFCs. Will the world seize the opportunity?

What is needed now is submission of information that packages rigorous research instead of just fiery rhetoric. Countries like Saudi Arabia, Kuwait, India, Pakistan and Iran should engage in healthy criticism instead of the corrosive scepticism shown by them so far. These countries need to be enabled through workshops to accept new scientific claims—facts do not speak for themselves. Experts should speak for science and prepare a roadmap to Paris and beyond a roadmap that will hopefully go through Montreal.