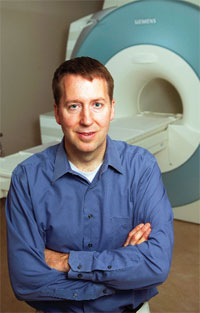 A TECHNIQUE that can improve the accuracy of MRIs for screening breast cancer by five times using signals from sodium in the body has been found.

Commonly used magnetic resonance imaging (MRI) scans pick signal from hydrogen atoms. Instead of hydrogen, the researchers have figured out a way to pick the same signal from sodium which, too, is abundant in the body. Sodium signals are roughly 10,000 times weaker than hydrogen signals and require a more sensitive and differently tuned antenna to be picked. The team has also created a new radio frequency coil design which gives much better sodium MRI images.

Currently, two methods are used to screen breast cancer—X-ray mammography and MRIs. While X-ray mammography is the most common tool, the procedure involves harmful radiation and is expensive. Both these methods are not absolutely reliable and sometimes raise false alarms, making patients undertake painful and expensive biopsies for confirmation.

The study, conducted by Utah-based Brigham Young University, US, was published in Magnetic Resonance in Medicine in September 16. The team also had researchers from the University of Utah, US.

Neal Bangerter, lead author of the study and co-leader of the project, says several groups around the world are working towards avoiding these false alarms. Bangerter has led the team to produce what he calls, an “add-on” to a normal breast MRI scan. “The cost of adding sodium MRI capability to an MRI scanner is relatively small compared to the cost of the MRI scanner itself. However, the addition of sodium MRI to an MRI breast exam would increase the total scan time, and hence, the cost of the exam. The new method does away with any ionising radiation and is significantly advantageous over X-ray mammograms. We also hope to be able to use sodium MRI in conjunction to other imaging techniques to identify tumour response to therapy early in the treatment cycle, so that treatment could be adjusted as needed,” says Bangerter.