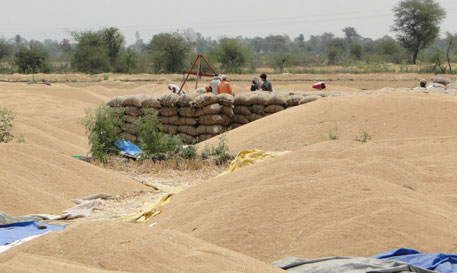 After announcing the dismantling of Planning Commission  in its present form, the Narendra Modi-led NDA government has set about restructuring another organisation—the Food Corporation of India (FCI). The ministry of consumer affairs, food and public distribution has constituted a committee to restructure FCI in order to put a check on high cost and high wastage in food procurement and its distribution to consumers. The committee has to submit its report in the next three months.

Shanta Kumar, Bharatiya Janta Party MP from Himachal Pradesh who served as the consumer affairs minister in the previous NDA government under Atal Bihari Vajpayee, will chair the eight-member committee. The committee will include chief secretary of Chhattisgarh and Punjab.

FCI was set up in 1964 under the Food Corporations Act of 1964 to safeguard the interest of farmers and consumers as well as regulate the market. FCI procures foodgrains at minimum support price (MSP) from farmers, distributes grains to consumers across the country through the public distribution system at subsidised prices and maintains buffer stocks to meet the country's food security needs.

The committee report is expected to make recommendations on the  role of FCI vis a vis MSP, efficient storage models and transportation facility, and upgradation of existing technologies.

The present system of procurement, storage and distribution is marred by high wastage, corruption and inefficiencies.

G Raghuram, professor at IIM-Ahmedabad and also a member of this committee, had last year conducted study on poor management of FCI. He specialises in infrastructure and transportation systems, and supply chain and logistics management. “A better management can bring a sea of change in existing FCI model,” Raghuram told  Down To Earth over phone. “I have conducted a detailed study which came out with findings related to  poor management of FCI, which is affecting farmers as well as consumers,” he added. But he didn't divulge details regarding terms of reference of the committee.

Food rights activists have long been demanding decentralisation of FCI. “The main problem lies with centralised procurement and storage of food grains. For this reason, the cost of taking food to go-downs and to consumers costs more than the food procurement at MSP,” said Dipa Sinha, a Delhi based right to food activist. “If the committee looks into the centralisation problems of FCI and encourages local procurement and storage model, it can yield good results,” she added.

Experts said issues related to operational efficiency and financial management should be looked into at the earliest.

“The operational efficiency here means cost effective procurement, better transport and storage facility. It also includes looking at whether procurement is done in surplus production area or also in low production area. These issues are need to addressed at the earliest,” said Gopal Naik, an agriculture expert teaching at IIM-Bengaluru.

He further said the issue of financial management also needs to be looked into. “The issue of debt should be dealt with at the earliest. FCI borrows loans from banks to provide MSP to farmers and after that it delays returning the loans, increasing the liability of FCI and creating funds crunch,” Naik added.