Five days after Cyclone Amphan landed an impact on coastal Odisha, residents of Balasore, Bhadrak, Kendrapara and Jagatsinghpur districts continue to live without electricity. With no power, people in these villages are cut off from the rest of the world.

The cyclone rocked coastal areas of the state on May 20 — uprooting trees, snapping power cables and leaving a trail of destruction affecting thousands of people.

As night descends in the cyclone-hit areas, villages are engulfed in darkness. A trip to a cyclone-affected seaside village Gupti under Rajnagar block of Kendrapara district is like a journey back in time. It has no power.

“We are living in darkness and only pray that light will come to our village soon. The authorities have promised they will repair the damaged electric poles,” said Tapan Jena of Gupti. 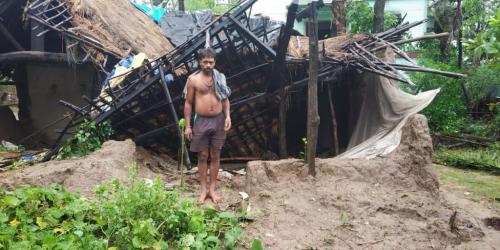 A man stands outside his damaged house in Balasore district. Photo: Ashis Senapati

The absence of power also means that most household chores have to be completed before dark. “We have to either light candles or lamps to do our chores. But when it is windy, even keeping them burning near the hearths becomes difficult,” said Parbati Behera, Sarapanch of Baradiha under Jaleswar block, Balasore district.

“Life now begins and sets with the sun. After dusk, there is nothing to do in this village,” said Harischandra Bhuyan, Sarapanch of Aruha Gram Panchayat under Jaleswar block in Balasore.

With no power — and no television — people have little information on the situation in other areas.

Many cyclone-hit but better-off villagers have begun to rebuild their houses, salvaging some rubble and adding new materials. Venturing out is dangerous as electricity wires dangle from light posts.

It may take some time to restore road communication in the gale-hit areas as some roads are accessible only by foot and their repair would take more than two months, said an official of Balasore district.

At least 9,833 villages under 1,558 Gram Panchayats and 272 wards in 22 urban local bodies of Balasore, Bhadrak, Kendrapara, Jagatsinghpur, Mayurbhanj, Cuttack, Jajpur, Keonjhar, Khordha, and Puri districts have been affected due to the cyclone.

According to preliminary assessment of power infrastructure, 34 kilometres of 33 kilovolt, 453 km of 11 KV lines, 680 km of low tension lines and 2,439 number of distribution transformers have been damaged.