Despite several court orders and crores of rupees spent on cleaning the river, the Delhi stretch continues to be the most polluted 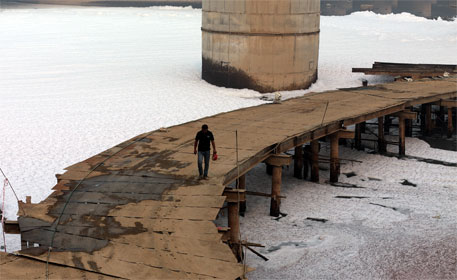 The order was issued last week in response to a plea filed by non-profit All India Lokadhikar Sangthan. The organisation had been fighting to put a stop to industrial pollution in the Delhi stretch of the river since 2013.

In October last year, DPCC was directed not to grant permission to any unit which directly or indirectly discharges toxic effluents into the river without following The Hazardous Waste (Management and Handling) Rules, 1989. DPCC had also issued closure notices to several units in northern Delhi’s Wazirpur Industrial Area for not following norms that supervise the quality of effluents in the Yamuna. These units also included steel pickling units, according to a DPCC source.

Last week’s order pertains to 17 operational stainless steel pickling industries in Wazirpur. These industries remove impurities such as stains, inorganic contaminants, rust or scale from steel with the help of a solution called pickle liquor which contains strong acids. Effluents that result from this process are toxic in nature.

Of more than 2,000 units in the area, most of them are steel pickling units and they add more than 200 million litres per day (MLD) of wastewater to the river, according to a Central Pollution Control Board (CPCB) report. Manoj Mishra of civil society consortium Yamuna Jiye Abhiyaan has welcomed the order, saying that industrial effluents add heavy metals to the river and make it toxic.

While hearing a case related to industries located near the Ganga and its tributaries in October last year, the Supreme Court had allowed NGT to disconnect power and water supply to any industry that was not following standard pollution norms. Since then, NGT has been hearing all cases related to industrial pollution of the Ganga. Yamuna, the largest tributary of the Ganga, travels a short distance of 22 km through Delhi. But this barely two per cent stretch of the river is responsible for over 80 per cent of the entire pollution load of the river.

The city has already spent some Rs 1,500 crore for cleaning the river. This is possibly the highest amount spent on river cleaning in the country. After the mid-1990s, the Delhi government invested in infrastructure for cleaning up rivers. The Yamuna Action Plan (YAP) added more planning and funding to the effort. It is estimated that till 2006, capital investment for cleaning the river had amounted to Rs 1,100-1,450 crore.

With time and investment, the pollution load in the river has only gone up. It is clear that the Delhi Jal Board (DJB), the city’s water utility board, has failed to meet the directives and deadlines of the Supreme Court order in “And quiet flows the mailee Yamuna” case. The court had ordered the DJB to restore the DO levels in the river to 4 mg/l so that it could be used at least for bathing. DJB has planned more hardware-driven programmes to deal with the pollution.