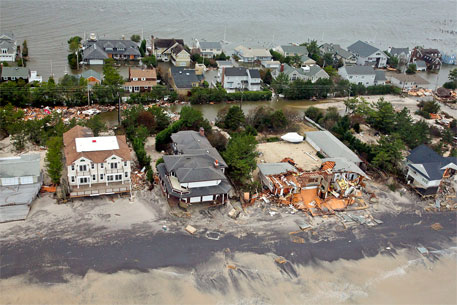 US President Barack Obama has announced a series of climate change initiatives aimed at guarding the electricity supply, improving local planning for floods, and storms and better predicting of rising sea levels.

The actions, which will be carried out by several federal agencies, were recommended by the president’s State, Local and Tribal Leaders Task Force on Climate Preparedness and Resilience, a group of 26 officials who have worked since November to develop the proposals.

One of the projects under the programme involves shoring up the power supply during climate catastrophes. The Department of Agriculture announced to give $236.3 million to eight states to improve electricity infrastructure in rural areas. The announcement comes in the wake of a government study released in May that said the country’s power supply system will not be able to withstand extreme weather conditions.

Tackling another of the recommendations, the United States Geological Survey and other federal agencies said they would spend $13.1 million on advanced three-dimensional mapping data to respond better to natural disasters. Also, the Bureau of Indian Affairs unveiled a $10 million programme to train tribes on climate change adaptations.

The announcements come at a time when climate is changing more rapidly than at any point on record. A new study, titled State of the Climate in 2013, says 2013 falls one of the warmest years since record keeping began in 1880. The report by the Bulletin of the American Meteorological Society  shows that global sea level reached a new record high last year—about 3.8 cm above the average measured by satellites between 1993 and 2010. “Overall, sea level is rising about 3 millimetre each year,” it says.

Last month, the US had released its draft rules to regulate carbon emissions as a part of Obama’s climate change agenda. It aims to cut carbon emissions from the power sector by 30 per cent nationwide below 2005 levels by 2030.