State's coast is nesting ground for the half the world's population of the endangered turtle; tour operators sceptical of the plan 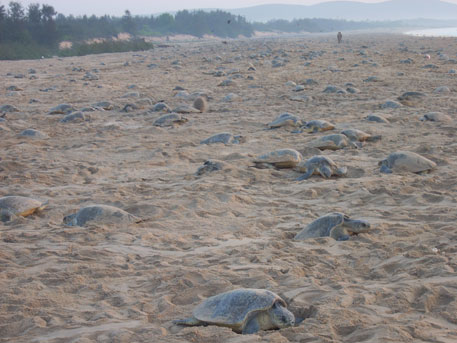 The Odisha government has chalked out plans to promote regulated eco-tourism to the mass-nesting sites of the endangered Olive Ridley turtles. The government has also decided to web-cast arribada (mass nesting) of the turtles.“Odisha is home to 50 per cent of the total world's population of Olive Ridleys and about 90 per cent of Indian population of sea turtles. The government will develop minimum infrastructure like proper road communications, small huts and tents near the turtle nesting sites at the mouth of Devi and Rusikulya rivers, the two major nesting grounds of the Olive Ridley. The Gahirmatha marine sanctuary is the largest rookery of the Olive Ridley turtles. “But Gahiramatha beach is a protected area and is close to Wheeler island, the missile testing centre of Defence Research and Development Organisaiton, because of which we kept Gahiramatha out of eco-tourism area,” said Jugal Kishor Mohapatra, chief secretary of Odisha.

The number of mass nesting of Olive Ridley turtles in Odisha coast has increased constantly over the years,” said Chandrasekhar Kar, a turtle biologist and the research officer of forest and wildlife department of Odisha (see table).

Artificial turtle hatcheries constructed by forest officials on the nesting ground to protect the eggs of the turtles from the predators, like dogs, jackals and other animals, could be shown to tourists; after emergence of hatchlings the tourists will be allowed to release the baby turtles as in other countries, added Kar. This happens in Australia, Costa Rica, Mexico and other countries where Olive Ridleys nest, and tourists from across the globe visit the beaches to witness mass nesting by paying hefty amounts.

Meanwhile, the state government has imposed a six-month-long fishing ban from November 1 to May 31 to protect the endangered Olive Ridleys in Gahiramatha in Kendrapada district. Trawlers and boat owners have been directed not to fish within 20 km of the coastline in the marine sanctuary areas, covering a 35 km stretch from Aagaranasi to Dhamra. Forest guards have been deployed to arrest fishers who enter the restricted area. Fishing has also been banned within 20 km of the coast of Rushikulya beach in Ganjam district and Devi beach in Puri district.

Tour operators in Odisha are, however, sceptical about the proposed eco-tourism project. Odisha is yet to attract overseas tourists to witness turtle nesting. The state government had made a similar announcement about an eco-tourism project about two years ago, but the project was shelved. States like Goa and Kerala have already started programmes to woo tourists, particularly from overseas by keeping a few sea turtles in some pens near the sea beach, but Odisha has not been able to promote eco-tourism in spite of its advantageous position, said Bijaya Kumar Patnaik, vice-president of Odisha Tour Guides’ Association.

Andaman Nicobar Islands also attracts many tourists by promoting eco-tourism near the nesting ground of the endangered leatherback sea turtles.   “Even neighbouring Sri Lanka earns millions of dollars by keeping some turtles in pens near the sea beach, which are shown to foreign visitors,” added Patnaik.

Solitary nesting and mortality of Olive Ridley Sea Turtles along the Ganjam Coast of Odisha, India