One in every nine persons in the world goes hungry: UN State of Food Insecurity Report 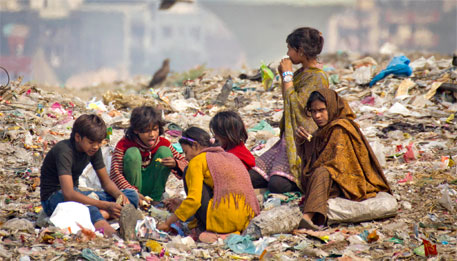 The good news is that the world today is producing enough to support the projected population of nine billion people by 2050. But the bad news is that still 805 million people—or one in every nine people—are hungry in the world, says a new report by the Food and Agriculture Organization (FAO), the International Fund for Agricultural Development (IFAD) and the World Food Programme (WFP).

The State of Food Insecurity in the World (SOFI 2014) shows that the number of hungry people has declined globally by more than 100 million over the last decade and by more than 200 million since 1990-92. But the vast majority of the hungry people “live in developing regions… (where) 13.5 per cent of the overall population, remain chronically undernourished in these regions, down from 23.4 percent in 1990–92”. (see chart ‘Changing distribution of world hunger, 1990-2014’) 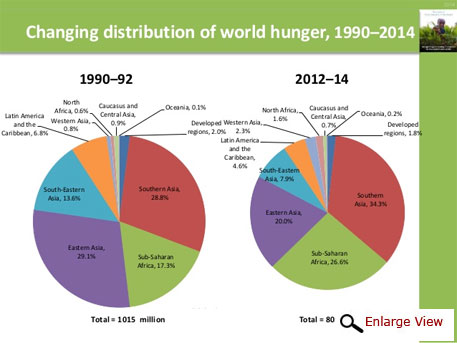 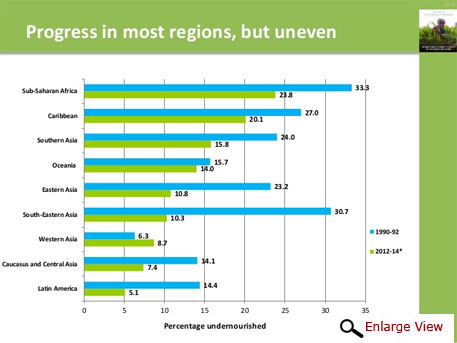 In Sub-Saharan Africa, more than one in four people remain chronically undernourished, while Asia, the world’s most populous region, is also home to the majority of the hungry—526 million people. Very slow progress was recorded in Botswana, Cote d’Ivoire, Madagascar, Malawi, Namibia, Uganda, United Republic of Tanzania and Zambia, where the number as well as prevalence of undernourished people in the population increased. The same was true of Asian countries such as the Democratic Republic of Korea, Iraq, Tajikistan and Uzbekistan, among others.

Latin America and the Caribbean have made the greatest overall strides in increasing food security. Meanwhile, Oceania has accomplished only a modest improvement (1.7 per cent decline) in curbing prevalence of undernourishment, which stood at 14.0 per cent in 2012-14, and has actually seen the number of its hungry increase since 1990-92.

The latest FAO estimates also indicate that while the world is likely to meet the UN Millennium Development Goal (MDG) of halving the proportion of undernourished in developing countries between 1990 and 2015, most nations will miss the more ambitious World Food Summit (WFS) target of halving the number of undernourished people during the same period. “This would require a reduction of more than 300 million people, which is not feasible in the time available,” says the report.

The report highlights that while the access to food has generally picked up across the world, steady availability of food remains a major element of food insecurity in the poorer regions of the world, notably sub-Saharan Africa and parts of Southern Asia. The report also highlights that while overall agricultural production has gone up, “utilization problems remain the single largest challenge for developing countries”.

Need for enabling governments
The only way to tackle the “unacceptably high” number of undernourished people is through renewed political commitment to tackle hunger. The report specifies that hunger eradication requires establishing “an enabling environment and an integrated approach. Such an approach includes public and private investments to increase agricultural productivity; access to land, services, technologies and markets; and measures to promote rural development and social protection for the most vulnerable, including strengthening their resilience to conflicts and natural disasters.”

“Inclusive growth is probably the key. Growth is important in terms of increasing incomes more generally as well as food production but in addition to that it must be inclusive. People must be able to afford to buy the food they need,” says Sundaram

The report also emphasises the importance of specific nutrition programmes, particularly to address micronutrient deficiencies of mothers and children under five.

The state of food insecurity in the world 2013