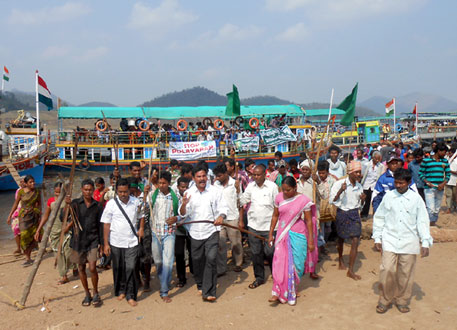 Adivasi communities affected by the Polavaram project are up in arms against the Andhra Pradesh Reorganisation (Amendment ) Ordinance, promulgated by the Narendra Modi government at the Centre. The ordinance, promulgated on May 28, envisages transfer of seven mandals (talukas) to the residual Andhra Pradesh state for the smooth completion of the Indira Sagar Polavaram Irrigation project.

The Rs 16,010 crore Polavaram project was granted national status in Andhra Pradesh Reorganisation Act introduced in Parliament in February this year by the previous Congress-led United Progressive Alliance government at the Centre as a condition for bifurcation of the state. The project is under construction in West Godavari district, a part of Seemandhra region. However, most of the villages that will be submerged are in Khammam district in Telanagana.

The dam will submerge 74 gram panchayats, 193 revenue villages in Khammam. Out of the 339 tribal settlements that will be submerged in Andhra Pradesh, 264 are located in the Schedule Five areas of Bhadrachalam and Palvancha revenue divisions of Khammam. The dam is expected to displace about 200,000 people, the highest ever by any dam in the country. It will also submerge about 3,500 hectares of forest land.

Read more on the controversial project

"The BJP-led government at the Centre promulgated the detrimental ordinance bypassing the constitutional safeguards meant for Adivasis," said Sunnam Rajiah, adivasi leader belonging to Communist Party of India (Marxist) and member of Telangana Legislative Assembly. He and a dozen MLAs from the seven mandals have started indefinite hunger strike in Bhadrachalam.

The ordinance envisages transfer of five mandals—Kunavaram, V R Puram, Chintur, Kukunoor and Velerupadu—completely and two mandals—Bhadrachalam and Burgumpadu—partially to Seemandhra. A 460 MW hydro-elecric project located at Mothugudem in Chintur will also be transferred to Seemandhra. The move is to avoid problems that may emerge in the future since the project will be in the residual Andhra Pradesh and most of the villages that would be submerged are in Telangana. Telangana, the 29th state, will come into existence on June 2.

"The Centre has not sought consent of the gram sabhas concerned before promulgating the ordinance hurriedly. It violates the rights of adivasis living in Schedule Five areas," said Vattam Narayana Dora, convener of Polavaram Project Vyathireka Ikya Poratta Vedika, an umbrella organization of manay adivasi groups fighting the project.

“The project doesn't benefit Telangana in any way. It's expected to irrigate about 300,000 ha in East Godavari, West Godavari, Krishna and Visakhapatnam districts, all in Seemandhra. Villages that will be submerged have passed resolutions against the project which would rob adivasis of their land, water, forest and livelihood. However, our appeals have not been considered at any point of time,” said Dora. 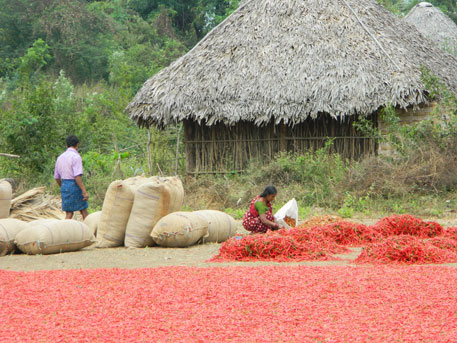 People in Bhadrachalam and Palvancha have been agitating continuously ever since the Polavaram project was taken up by the state government in 2004. They had intensified their agitation when the Reorganisation Bill was introduced in Parliament. "We had given our submissions to the president, prime minister, governor, chief minister and the Central and the state tribal ministers against the move to transfer the submergence villages from Telangana to Seemandhra. But all our appeals were ignored. Now the Modi-government is violating our rights through the ordinance," says Podium Narendra Kumar, another tribal activist.

This Down To Earth (DTE) correspondent had visited many tribal villages in February this year. All the people, including adivasis, who the correspondent spoke to said they wanted their villages to continue in Telangana for which they had been fighting for long. They had also pointed out that no proper rehabilitation plans have been formulated for them by the government.

"The undemocratic move will displace more than 200,000 adivasis from their natural habitat and play havoc with their lives and livelihoods," Rajaiah said, asserting that he would continue the indefinite fast until the Centre withdraws the controversial ordinance. The Centre should scrap the ordinance and explore alternative proposals suggested by some experts to change the design of Polavaram project to minimise submergence, he added.

Representatives of various tribal organizations and the Telangana Joint Action Councils of employees, advocates and other professionals have extended their support to the indefinite hunger strike by Rajaiah and others.

Yesterday, 10 districts of Telangana observed a day-long bandh in protest against the Modi government's Polavaram ordinance. K Chandrasekhar Rao, chief minister designate of Telangana, had written a letter to President Pranab Mukherjee on May 28, pointing out the ordinance was unconstitutional. The president has given his consent to the ordinance.

The project will also submerge some adivasi villages in the neighbouring Odisha and Chhattisgarh. Both the states have approached the Supreme Court against the construction of the mega dam.