Police register FIR against 32 people for 'encroaching' on POSCO land

POSCO says people have already been compensated for land acquired; residents say their land was taken at gun point and have no means of livelihood 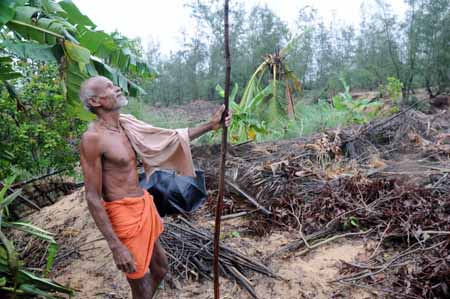 People in Jagatsinghpur district, affected by the POSCO steel plant project, are in for some more trouble. The South Korean steel company filed a first information report (FIR) against 32 residents at Abhayachanapur police station on Tuesday. Their fault: they rebuilt their betel vine farms which had been flattened during land acquisition in Dhinkia, Nuagaon and Gadakujang gram panchayats last year.

POSCO spokesperson Basanta Kumar Jena said his company had taken serious view of the matter. “The landowners accorded consent for acquisition of their betel vines. Accordingly, their betel vines were pulled down after GPS measurement and compensation amount was received by them. The whole process was videographed to keep the process foolproof. But recently some villagers illegally mended their betel vines and constructed houses because of which POSCO filed complaints against them,” he said.

Anirudha Routray, the inspector in charge of the police station, said that cases have been registered against the “encroachers” under sections 447 (criminal trespass) and 426 (commission of mischief) of Indian Penal Code. Police are investigating the case, he said.

“Under the given circumstances, the act of rebuilding of betel vines amounts to forceful land grabbing and breach of law. Officials have been directed to demolish the rebuilt betel farms,” said Sarat Kumar Purohit, tahasildar of Earasama. Criminal cases would be registered against the occupiers under provisions of Odisha Prevention of Land Encroachment Act (OPLE), he added.

The steel project, which was facing uncertainty because of stiff public resistance and court cases, got a boost after the district administration acquired 2,700 acres (one acre equals 0.4 ha) on July 4 last year in the three gram panchayats. POSCO had earlier proposed a 12 million tonne per annum (mtpa) steel plant. But later the steel company sought at least 2,700 acre to start an 8 mtpa plant.

In spite of POSCO getting clearance go ahead with the project, people have been resisting it. The rift between the POSCO and the land losers reached a flash-point on February this year when around 1,200 villagers, armed with shovels, dismantled the boundary wall and torched the POSCO office in Nuagaon, said Nirvay Samantray of Nuagaon

Due to long delay of the construction work of the steel plant, many locals managed to rebuild betel vines on their land despite getting compensation amounts, added Samantray.

“The officials demolished the betel vines at gun point because of which villagers have taken law unto their hands and have rebuilt the demolished paan farms. We have been exhorting them to rebuild their flattened betel vine farms as they lost their sole livelihood after the authorities forcefully demolished their betel vines,” said Abhaya Sahoo, president of people's front, POSCO Pratirodh Sangram Samiti (PPSS) .

Order: Order of the National Green Tribunal on the issue of cutting of trees in the forest area by POSCO, 24/01/2014

Order: Judgement of the National Green Tribunal regarding the Forest Clearance granted to POSCO in Jagatsinhpur district of Orissa by the MOEF, 30/03/2012