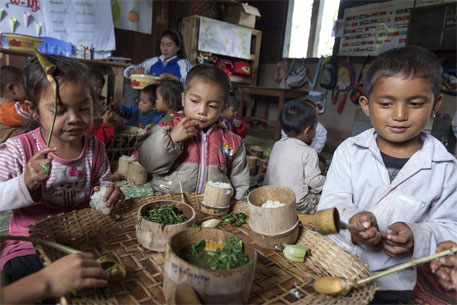 Most of the world’s undernourished people are still found in South Asia, followed by Sub Saharan Africa, Eastern Asia, Latin America and the Caribbean, reveals the fourth edition of “The State of Food Insecurity in the World” report, released on Tuesday. It has been jointly drafted by the Food and Agriculture Organization of the United Nations (FAO), the International Fund for Agricultural Development (IFAD) and the World Food Programme (WFP).

The 2014 FAO estimates on the global hunger and undernutrition show that, since 1990–92, the prevalence of undernourishment has fallen from 18.7 to 11.3 per cent in 2012–14 for the world as a whole, and from 23.4 to 13.5 per cent for the developing regions. Despite this progress, the number of hungry people in the world is still unacceptably high: at least 805 million people, or one in nine, worldwide do not have enough to eat.

Although the global picture seems to be looking fine, but the wide disparities that exists within and among the region must be of concern to policy makers in the developing countries, especially in the South Asian nations.

Therefore, a significant reductions in global hunger numbers require even greater progress in the region, says this FAO report. While the MDG hunger target has already been achieved in Eastern and Southeast Asia, but progress to reduce hunger has been very slow in the South Asian region. So although hunger prevalence in Southern Asia has declined, but the progress has been slow and only 15.3 million South Asians have overcome hunger since 1990-92. In 2014, the South Asia with over a half billion has the highest number of the chronically hungry.

According to the UN report, the main challenge for the region is the slow progress in improving the low levels of food utilization.  While some progress has been made over the last two decades, there is still much room for improvement, says FAO. In addition, South Asia faces major access problems. While it has experienced rapid overall economic growth, most of the region’s poor have not participated adequately. Various social protection interventions have not been enough to ensure food access and undoubtedly needs the political will and commitment.

The State of the Food Insecurity in the World 2014