Manipur, Assam and Tripura have increased screening of foreign visitors, including football players 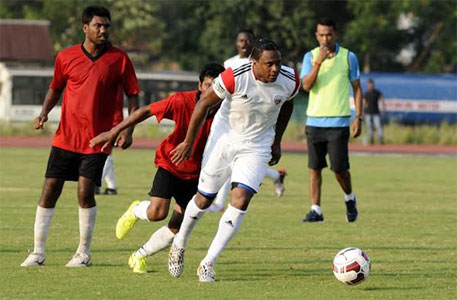 State governments in the Northeast have stepped up screening for immediate detection of cases of Ebola and have also started monitoring the entry of foreign nationals in the states.

Scrutiny has been increased after a Japanese tourist, suspected of having Ebola, was shifted to isolation at Imphal in Manipur. Kawakubo Yuko, 27, entered Manipur from Myanmar. She suddenly developed fever and visited a private hospital in the town.

Doctors suspected that her symptoms were identical to that of Ebola and immediately admitted her to the Jawaharlal Nehru Institute of Medical Sciences (JNIMS) in Imphal on October 6. Her blood samples have been sent to the National Institute of Virology, Pune, and the results are awaited.

All tests for kidney and liver function, malaria, typhoid and complete haemogram have turned out negative so far.

“Nothing has been confirmed at this stage, and we will get a clearer picture only after receiving the test results from the National Institute of Virology, Pune,” said JNIMS Medical Superintendent W Gopimohon.

Screening measures at airports, borders
The Manipur government, meanwhile, has set up Ebola screening gates for passengers at the Imphal airport and at the international border with Myanmar at Moreh. The state is also screening people at its borders with neighbours Nagaland and Assam.

Manipur Chief Minister Okram Ibobi Singh held a high-level meeting with senior state and district administration officials on October 3 to discuss measures that would need to be taken in case of an outbreak.

Doctors and government officials, however, point out that they are facing an acute shortage of necessary equipment and staff.

“We are trying to manage the screening of people despite being short of staff as we have got strict instructions from higher authorities,” said G Sharma, doctor in-charge of Jiribam community health centre, which is along the Assam-Manipur route.

Sharma added that they are screening for Ebola with a simple digital thermometer instead of the Contact Laser Infrared Thermometer.

Not taking any chances
Assam’s health department has been screening foreign nationals entering the state, for symptoms of Ebola, for the past few months.

“Apart from monitoring the movement of foreign nationals who have entered the state, we are also checking their travel details to get an idea about their travels in the last few months,” said Assam’s health and family welfare minister, Nazrul Islam.

The Assam health minister also said that he has issued directives to all health officials at the district level to conduct a short orientation for junior level officials, particularly those at the sub-divisional level on the issue.

“It will give them an idea regarding how to approach someone who might be a suspected Ebola victim,” said the health minister.

Islam also told Down to Earth that the state government is planning to write to the Centre for assistance and guidance in this regard, and added that they are facing difficulties because Pune is the only place where tests for Ebola can be carried out.

“We are taking up the matter with the Central government,” said the health minister.

Nigerian footballers in Assam examined
The state government is also monitoring the health of foreign football players who are associated with several football clubs in the state. Presently, there are over 20 players from Nigeria in Assam.

“We are monitoring the players’ health for any symptoms associated with Ebola. So far, they have not manifested such symptoms. So, we have not collected their blood samples yet. Ebola virus can be tested only in Pune and New Delhi. We do not have such a laboratory facility in the state,” Partha Gogoi, regional director of the Union ministry of health and family welfare, said.

Football club authorities confirmed that officials of the health department had visited the clubs to examine the foreign players.

“No foreign player has shown any kind of infection as yet, and we are offering full cooperation to the health department in this regard,” said Bhola Das, general secretary of the Guwahati Sports Association and of Dynamo club, which has several foreign players.

Gauhati Town club and the Green Valley club have also confirmed that the Nigerian football players in their teams have been examined by doctors from the health department.

Speaking to Down to Earth, Badal Choudhury, health minister of Tripura said that the state government has issued directives to the health department and districts to monitor foreigners entering the state from Ebola-affected countries.

“Directives have also been issued to hospitals in the state to be on stand-by,” said the health minister.

The government has alerted airport authorities and border outposts to monitor foreigners entering the state. Joint director in charge of preventable diseases in the Tripura health department, Pranab Chatterjee, said, “The airport authorities have been directed to segregate anyone suspected of carrying the viral disease, inform the health department and send the person in a special ambulance to the isolation wards in hospital.”

Tripura receives a large number of people from Bangladesh. Since many Bangladeshis also work in African countries where there is an Ebola outbreak, Chatterjee fears an outbreak of the disease in the neighbouring country. He, however, confirmed that the Bangladesh government has already initiated surveillance measures at its airports, railway stations, seaports and border check posts, for people returning from Ebola-affected countries.

“The risk level of Ebola in the state would rise if any case is detected in Bangladesh,” he said.

On the quarantine period for Ebola virus