Government hospitals testing only those patients who are in poor condition, complain patients 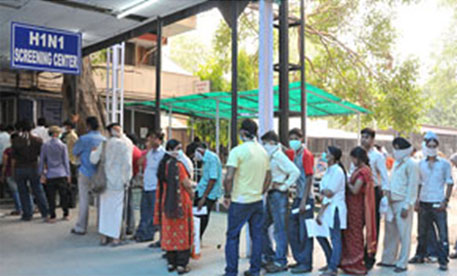 The high number of swine flu deaths reported in India in recent weeks has spread panic among citizens in the absence of awareness and sufficient laboratory testing facilities. So far, nearly 600 people are reported to have died of the disease in the country; the worst-hit states being Rajasthan, Gujarat, Madhya Pradesh and Maharashtra.

The panic is such that even those diagnosed with seasonal cough and cold are rushing to get themselves tested. Asahi Chowdhary, who works for a tourism firm in Delhi, was suffering from sore throat for five days. A senior doctor at Safdarjung hospital diagnosed her as suffering from cold and cough, but her office colleagues insisted she get herself tested for swine flu. "The office feared that I might spread infection to others," said Chowdhary.

She went to a private hospital in central Delhi and spent Rs 2,500 on the test. The test was negative. "In the private hospital, too, the doctor said I don't need to get myself tested because I do not have fever. But I insisted," she said.

So far, the government has made few efforts to make people aware of the symptoms. Due to scarcity of laboratories to test for swine flu, attempts to reduce number of samples sent for testing, is leading to further panic among people.

"There are few accredited laboratories. Many states have barely any and the samples are brought to Delhi," said a senior Delhi government official. This is leading to patients being turned away in Delhi, too.

The swine flu test
In government hospitals across country, swine flu is tested free of cost from accredited labs. Private hospitals charge more than Rs 2,000 for the test.

But before the confirmation test, a preliminary test is conducted.

A quick test of nasopharyngeal swab sample is done to see if the patient is infected with influenza A or B virus. If the test is positive for type A, the person could have seasonal influenza or swine flu.

Swabs of such patients are then sent for test using polymerase chain reaction (PCR) technique. The PCR test checks for antigens (surface proteins) associated with the virus type. If the antigens match those associated with swine flu, then the case is called a confirmed swine flu case.