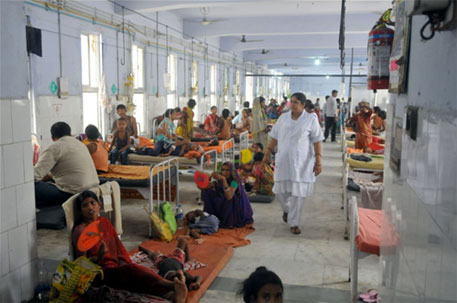 As many as 13 women have lost their lives and at least 18 are in a critical condition after undergoing sterilisation at a government camp in Bilaspur district in Chhattisgarh. The state’s health minister, Amar Agarwal, hails from this district.

The women underwent the operation as part of a “family planning” camp organised on Saturday in Panderi area of Bilaspur. By Sunday morning, they had started complaining of pain, fever and vomiting.

Locals say the first death occurred on Monday morning. Twelve other women have died since then. Around 50 women are being treated in three hospitals of Bilaspur city, of which at least 18 are in a critical condition.

Eighty women had undergone sterilisation in a span of five hours. While health officials have denied any negligence on their part, families allege that doctors rushed to meet targets.

It was Gupta who reportedly performed all the surgeries on Saturday. He was awarded by the chief minister earlier this year for performing 50,000 laparoscopic tubectomies.

The government has increased the compensation for families of the victims from Rs 2 lakh to Rs 4 lakh. Prime Minister Narendra Modi has asked the chief minister to ensure thorough investigation and action on the issue. The Union Ministry of Health and Family Welfare (MoHFW) has also sent a four-member team from AIIMS to the state for further investigation.

Sterilisation camps are held in the winters as part of the state population control drive. Each woman is awarded Rs 1,400 for undergoing the surgery.