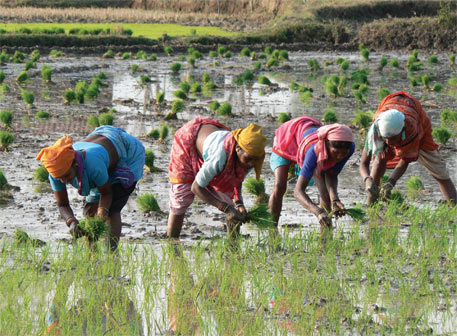 UN agencies on Friday announced guidelines regarding permissible levels of arsenic in rice. The maximum limit, set at 0.2mg of arsenic per kg of polished rice, has been set by Codex Alimentarius Commission, the UN body responsible for setting food safety standards, jointly run by World Health Organization (WHO) and Food and Agriculture Organization (FAO).

The Codex Commission has also offered suggestions to decrease the presence of arsenic in rice, such as  improved irrigation and agricultural practices and growing crops in raised beds instead of flooded fields. The UN body has agreed to develop a new code of practice to help countries comply with the set maximum level and provide cultivators with good agricultural practices to reduce contamination.

Rice readily takes up arsenic from the soil and groundwater, partly because it is grown in water-flooded conditions. In several Asian countries,  paddy fields are irrigated with groundwater containing arsenic-rich sediments pumped from shallow tube wells. As a result, people in countries where rice is the staple diet, such as Bangladesh, India, China and Vietnam, face health risks from arsenic.

In India, parts of West Bengal have been found to have high levels of groundwater arsenic. A  2009 study by a team from School of Environmental Studies (SOES), Jadavpur, found that  an adult in Kolkata consumes 23 μg of inorganic arsenic from cooked rice per day, while an adult in areas of known contamination in West Bengal consumes 65μg per day.  The Jadavpur University paper also provides figures for presence of arsenic in raw rice. The researchers found that in arsenic contaminated areas, raw Boro variety, which is grown using groundwater, has 249 µg/kg of arsenic. This is higher than new codex standard.

According to Dipankar Chakraborti, director (research) at SOES, who was part of the team that conducted the study, India has currently not set any standards regarding the presence of arsenic in rice and follows the internationally set standards.

India and Vietnam are also currently two of the world’s largest exporters of rice.

Arsenic is highly toxic in its inorganic form and long term exposure has been proven to cause cancer and skin lesions. It has been associated with cardiovascular disease, neurotoxicity and developmental effects. The occurrence of arsenic in groundwater is mostly due to the leaching of geological materials, mineral precipitation, dissolution of unstable arsenic minerals, pesticides and fertilisers. It enters the food chain when this groundwater is used for  drinking purposes and irrigation of crops.