The United Nations has expressed concern over persistent gaps in commitments of development aid made by donor countries. In the latest report, titled The State of the Global Partnership for Development, released by the  MDG Gap Taskforce this week, the UN has highlighted the slow progress made by developed nations in reaching their pledged volumes of official development assistance (ODA). The ODA is directed towards helping least developed countries achieve their Millennium Development Goals (MDGs).

According to a UN news report, UN Secretary-General Ban Ki-moon urged leaders and citizens to “boldly step forward” to eradicate poverty, raise living standards and sustain the environment. “I call on all governments and international institutions to continue strengthening the global partnership for development so that we can usher in a more sustainable future,” he said.

The report noted that though the volume of development assistance reached its highest level at $135 billion in 2013, there was a significant decline in bilateral aid to sub-Saharan Africa. 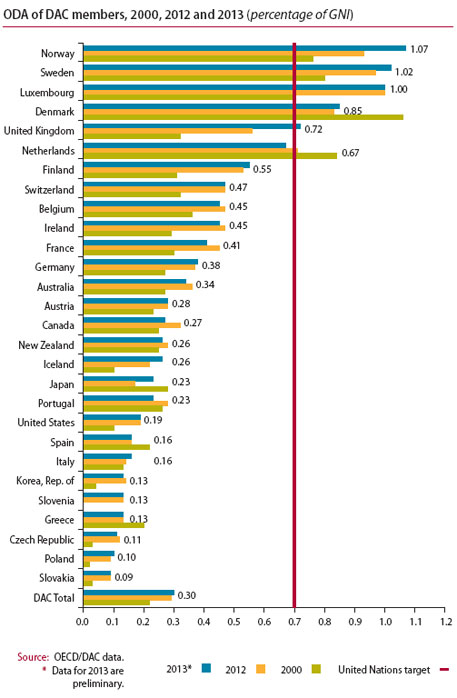 In September 2013, member states of the UN had called for the urgent implementation of aid commitments, especially of 0.7 per cent of donor Gross National Income to developing countries and 0.15-0.20 per cent to least developed countries.

While Denmark, Luxembourg, Norway, Sweden and the United Kingdom reached their targets, the biggest decreases in aid were seen from Canada, France and Portugal.