The region is grappling with problems like unemployment, corruption, gender bias and people trafficking 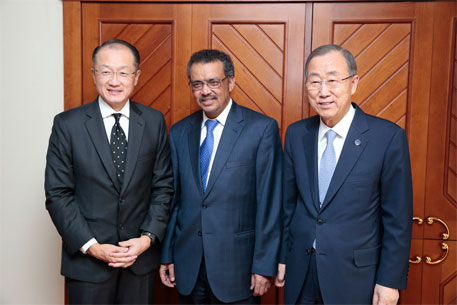 The Wold Bank and leaders of global and regional institutions of many countries have pledged major political and financial assistance, totalling more than $8 billion over the coming years, for countries in the Horn of Africa.

The assistance that has been promised to boost economic growth and opportunity, reduce poverty, and spur business activity was announced on Monday, during the start of a five-day and three-nation visit to the region by a delegation of international aid officials, led by United Nations Secretary-General Ban Ki-moon.

The initiative covers the eight countries in the Horn of Africa—Djibouti, Eritrea, Ethiopia, Kenya, Somalia, South Sudan, Sudan, and Uganda. According to the World Bank (WB), the region is diverse, with some of the fastest growing economies and huge untapped natural resources. It, however, is also home to many extraordinarily poor people and populations that are now doubling every 23 years. Evils of unemployment, corruption, gender bias and people trafficking are largely prevalent in the Horn of Africa. Countries are also vulnerable to terrorism, piracy, arms and drug trafficking.

The World Bank alone has announced an aid of US $ 1.8 billion, in addition to its existing development programmes for the eight countries, to create economic opportunities in the region.

Building up communicable disease surveillance, diagnosis, and treatment capacity are also on the agenda of the UN’s financial wing. "The countries of the Horn of Africa are making important yet unheralded progress in economic growth and political stability. Now is a crucial moment to support those efforts, end the cycles of conflict and poverty, and move from fragility to sustainability,” said United Nations Secretary-General, Ban Ki-moon.