Adivasis, Bengali Muslims worst hit by child malnutrition in Assam They have low access to nutritious food in spite of increase in number of anganwadis under Integrated Child Development Scheme 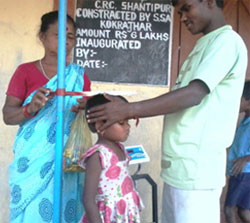 Adivasis and Bengali Muslims have highest rate of malnutrition in Assam. A comparison with data of 2005-06 for Assam, collected for children of all age groups by the Central government, shows that their condition has not improved despite a proliferation of anganwadis in the state. The problem is acute among Bengali Muslims, primarily owing to their immigration status and low wages in tea gardens.

These are the findings of a report prepared by National Foundation of India (NFI), a Delhi-based non-profit, in collaboration with an Assam-based NGO, the ant.

The study, conducted in four districts—Darrang, Sonitpur, Dibrugarh and Chirang—from January to April  2013, showed that 53 per cent of all children in 2-5 yr age group, were stunted (low height for age). In the same age group, 21.8 per cent were severely stunted, applying WHO definitions for both. The rate of stunting among Bengali Muslims was found to be 67.7 per cent. It was relatively low among Adivasis at 38.5 per cent. The same trend was observed for severe stunting—34.7 per cent among Bengali Muslims and 9.5 per cent among Adivasis.

However, prevalence of wasting (low weight for height) was found to be higher among the Adivasis. The data showed that 8.2 per cent children of all communities were wasted and 1 per cent were severely wasted. The rate was more or less the same for Adivasi children—10.4 per cent and 1.1per cent. No data was available for Bengali Muslims.

"The report shows that children belonging to tribal and Bengali Muslim communities are worst off. They are more malnourished because of low access to nutritious food," said Monica Banerjee, director-programmes, NFI, Delhi.

Conducted among 1,376 children, the study compared the results with the data for Assam from the 2005-06 National Family Health Survey (NFHS) - 3. The report shows that the situation has hardly improved. For example, if 7 per cent children of 2-3 years of age were wasted during NFHS-3, it is 7.4 per cent in the new report. The situation for children in age group 3-4 years is worst—wasting has increased significantly from 8.1 per cent to 15.2 per cent. Similarly, for children in 4-5 years age group, from 12 per cent it has barely come down to 11 per cent.

After a Supreme Court order of December 2006, the government increased number of anganwadi centres to 36,918. Even though this is short of the mandated number of 60,000 centres, "the situation should have improved", said Banerjee. Government data shows that the number of beneficiaries under Integrated Child Development Scheme (ICDS) has increased. ICDS provided food to 3,887,520 children below 5 years of age in 2008 – 09; this number increased to 53,42,057 in 2011-12.

The report notes that the "illegal tag" of the Bengali Muslim community hampers their access to basic food. They do not own land to grow own food. The miserabley low wages in tea estates and the lack of prompt medical services among these communities are also at the root of high malnutrition, says the report.