How the chemical causes the skin disease still a puzzle 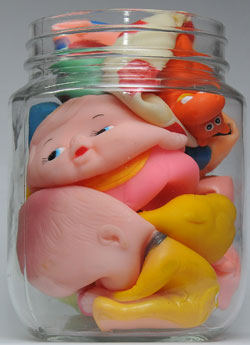 Phthalates are virtually the gang leaders among chemicals that impair health. They are known to cause reproductive problems and alter hormone functioning. Now these group of chemicals, commonly found in toys, furniture and medical devices like intravenous bags, have been linked to eczema in children.

Eczema is a type of persistent skin rash. It accompanies symptoms like dry, itchy red skin on the face, scalp, or extremities. It can be allergic or non-allergic. Researchers from the US have now found that prenatal exposure to a phthalate—butylbenzyl phthalate (BbzP)—puts a child at risk of developing the skin disease.

“While hereditary factors, allergens, and exposure to tobacco smoke are known to contribute to the condition, our study is the first to show that prenatal exposure to BBzB is a risk factor," says Allan C Just, lead author of the study.

For the study, researchers tested urine samples from 407 non-smoking African-American and Dominican women in New York City in their third trimester of pregnancy. The women answered questions about their children at ages 24 months and 60 months. Results indicated that at age two, children of mothers with high BbzP concentration were twice as likely to have early onset of eczema.

Though how presence of phthalates could lead to a condition like eczema, which is often due to allergens, is still a puzzle, the researchers decided to test if phthalates were causing eczema by creating an allergic reaction. They collected blood samples of these children aged between 24 months and 60 months. However, there was no evidence of an allergy. "We know allergies are a factor with some childhood eczema, but our data suggest that is not the case when BBzP is involved," says senior author Rachel Miller, associate professor of medicine and environmental health sciences, at Columbia University Medical Center. The study was published on June 26 in the advance online edition of Environmental Health Perspectives.

Use of some phthalates in toys is already banned in the EU, the US and Japan to prevent exposure of kids to these harmful chemicals. India, however, has no regulation for this brand of toxics. A recent Swedish study found that high concentration of phthalates in the body can lead to type two diabetes in the elderly.

After a study by the non-profit Centre for Science and Environment in 2010  that found that toys in India contain phthalate levels more than those defined as upper limit by the EU, the Bureau of Indian Standards (BIS) drew standards in line with international norms for use of phthalates in toys last year. These have been notified and implemented, the BIS informed Down To Earth.

However, there's still little evidence of how much phthalate’s are present in Indians. A 2011 study by K Kannan, professor at department of environmental health sciences at the State University of New York in the US showed that levels of phthalates in Indian blood are way below levels designated as dangerous by the US EPA. However, there is enough evidence to prove that a number of chemicals including phthalates and bisphenol A–now termed as obesogens–can trigger obesity at even low-levels. By Kannan's own admission, “exposure to many environmental chemicals or so called obesogens even at nanogramme to microgramme level can trigger obesity. These chemicals can alter or modify normal metabolic pathways.”