Diwali is far, but smog is here 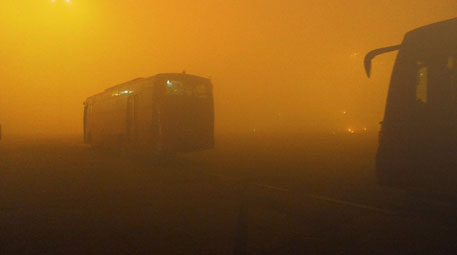 Wonder why people are choking on Delhi's air much before Diwali? The reason is the calm weather conditions prevailing over the city which has led to the build up of several air pollutants. Such conditions also prevent the dilution and dispersal of air pollutants.

The rapid build up of pollution since the month of October, after the monsoons ceased, is stunning. For instance, in Civil Lines area in north Delhi, the PM 2.5 (particulate matter or air pollutants containing particles with 2.5 micrometre diameter or less) levels in the first week of October exceeded the permissible limit by 1.3 times. By the last week, the levels exceeded the standard four times over.

The prevailing calm weather conditions are indicated by very low wind speeds, recorded in the range of 0.12 to 1 metre per second in different locations. Studies indicate that small particles aggravate respiratory and cardiac symptoms in the short term and can lead to lung cancer in the long term.

Besides particulate matter and ozone levels, nitrogen dioxide (NO2) and carbon monoxide (CO) levels too are exceeding the standards. These pollutants (NO2 and CO), come predominantly from vehicles. NO2 is a trigger for serious respiratory condition and sudden death syndrome among infants. CO curbs blood’s oxygen carrying capacity.

Respiratory ailments on the rise

Such high air pollution levels have adverse health implications. The Central Pollution Control Board (CPCB) had released a report, ‘Study on Ambient Air Quality, Respiratory Symptoms and Lung Function of Children in Delhi', in 2008 which indicate the respiratory ailments are on the rise. The symptoms were more prevalent in children during winter when particulate levels in air is highest in a year, and lowest during monsoon when particulate air pollution level is lowest, suggesting a positive association with particulate air pollution. Delhi’s children had 1.8 times more upper respiratory symptoms (sinusitis, running or stuffy nose, sneezing, sore throat and common cold with fever) and two times more lower respiratory symptoms (frequent dry cough, sputum-producing cough, wheezing breath, breathlessness on exertion, chest pain than children living in rural West Bengal and Uttaranchal. The most startling finding was that in 43.5 per cent school children of Delhi had lower lung function compared with 25.7 per cent in the control group. This study surveyed 11,628 school-going children from 36 schools in different parts of Delhi in different seasons and children in control areas in rural West Bengal and in Uttaranchal which have much cleaner air.

Delhi is yet to officially introduce a smog alert system-based air quality index which can be used to issue to health advisories. Other countries have introduced such a system. During high pollution episodes, Paris authorities issue advisories. These recommend drivers to postpone trips to Paris, or bypass the city, use public transport, organise car-pooling, minimise combustion of high sulphur fuels in industry, curtail industrial operations and so on. In Mexico phase one pollution alert requires cutting down of industrial pollution by 30-40 per cent, keeping 50 per cent government of vehicles and most polluting vehicles off road. Alternative fuel vehicles are exempted from restrictions. In phase two alert, schools are closed and one-day-a-week ban on vehicles is extended to two days. Phase three alert leads to closing down of industry in addition to the other curtailments. Berlin does not allow older polluting vehicles in the city centre in any event. Other governments take daily pollution levels very seriously to protect public health.

The city already has in place advanced emission norms; stronger “pollution-under-control” programme; a CNG programme; and has restricted a large number of commercial vehicles from entering the city. Experts says that the next series of steps need to combat not only the rising pollution but also the mixture of pollutants. This is challenging in a city that already has more than six million registered vehicles and adds more than 1,100 new personal vehicles a day. This is almost double what was added in the city in pre-CNG days. The market share of diesel cars in new sales is more than 50 per cent of car sales. While Delhi has emission norms that require 50 ppm of sulphur content, the diesel emission norms allows higher limits for NOx and particulate emissions compared to petrol cars. The city urgently needs tighter emission norms and enforce use of diesel with 10 ppm sulphur content. At the same time, the city needs to achieve its Masper Plan target of achieving 80 per cent travel share of public transport by 2020. Will the government take these measures in the interest of public health?

The potential of lower vehicular emissions in Indian cities

Status of the vehicular pollution control programme in India

Level of air pollution in Delhi