Mandatory public hearings are still pending in Odisha and Chhattisgarh 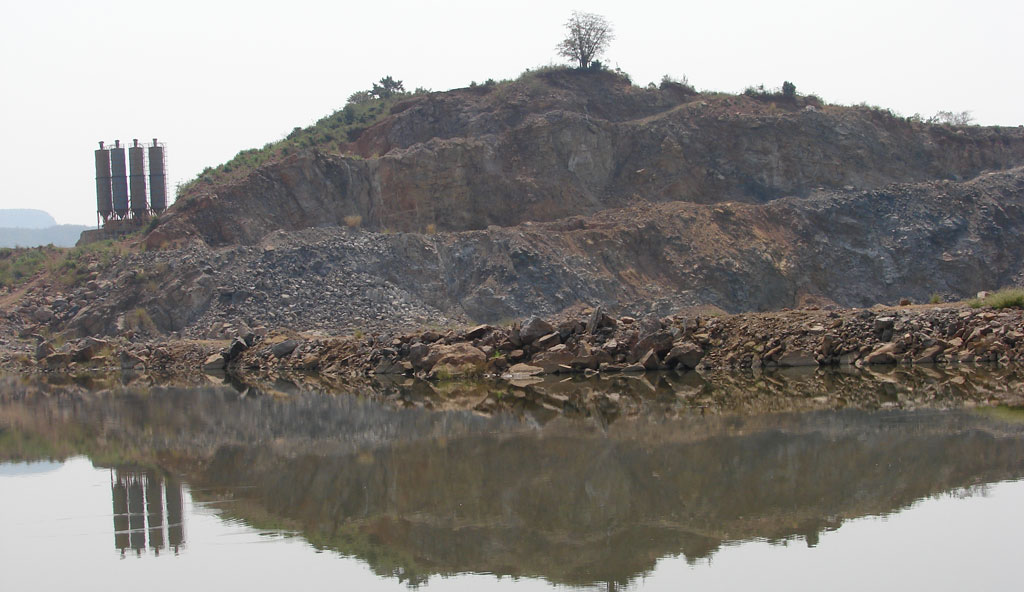 The Ministry of Environment, Forests and Climate Change (MoEFCC) has once again allowed the Andhra Pradesh government to resume construction of the controversial Indira Sagar Polavaram project, a multi-purpose mega irrigation project in West Godavari district.

In a letter dated July 3, 2015, Indian environment minister Prakash Javadekar informed Andhra Pradesh Chief Minister N Chandrababu Naidu that the Centre had done away with a stop-work order issued in 2011. The decision of the ministry was in response to a letter dated April 25, 2015, sent by Naidu seeking a go-ahead.

The environment ministry has also issued an executive order in this regard. A similar order allowing work on the Polavaram project to continue was issued on January 1, 2014, for six months.

The latest letter is an extension of the order issued in 2014. Activists allege the government is trying to complete the Polavaram project through repeated extensions.

The ministry's decision comes even as public hearings on the impact of the project are still pending in the neighbouring states of Odisha and Chhattisgarh. These hearings are mandatory under the Environment Protection Act, 1986.

Some villages in these states will be submerged once the dam is completed. The ministry has also ignored the fact that Odisha and Chhattisgarh have separately approached the Supreme Court against the project, and that the cases are pending in court. 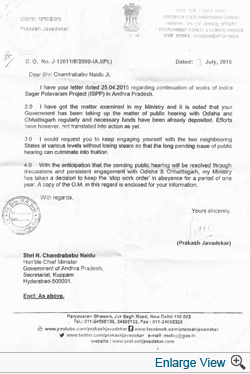 Javadekar’s letter said the ministry was allowing construction for one year anticipating that issues related to the public hearings would be resolved through discussions.

The controversial dam is expected to irrigate about 300,000 hectares (ha) of agricultural land in Andhra Pradesh and generate 960 MW of power.

It will cause more than 300 villages in West Godavari and East Godavari districts of Andhra Pradesh and some villages in Odisha and Chhattisgarh to be submerged. A majority of these are tribal villages.

According to a 2010 estimate, the dam will displace more than 200,000 people, the highest ever by any dam in the country. The dam will also cause submergence of 3,500 ha of forest land.

Conducting public hearings in connection with a proposed project is the responsibility of the respective State Pollution Control Board. But in the case of the Polavaram project, the Centre has, in its executive order, asked the Andhra Pradesh government to ensure that public hearings take place in Odisha and Chhattisgarh. The ministry has also asked Andhra Pradesh to submit the outcome of the public hearings.

"During the first three to six months of this period of one year, the government of Andhra Pradesh shall ensure public hearings are conducted in the states of Chhattisgarh and Odisha and submit the outcome of the public hearings to the environment ministry," says the order.

The Andhra Pradesh government has, on its part, assured the Centre that it will make changes in the design and operating parameters of the project, if necessary, based on the results of these hearings and carry them out in consultation with the Central Water Commission (CWC). However, it does not explain how it proposes to change the design of a project slated for completion in March 2018.

Odisha and Chhattisgarh are reportedly in the dark about the decision of the ministry.

"The compensation paid by the government for the lost land and assets was very low under norms fixed years ago," says G Anil Kumar, director of Integrated Tribal Development Society (ITDS), a Polavaram-based non-profit engaged in securing better packages for those affected.

On July 27, Polavaram project's special collector, B Sudarsanam, conducted a special meeting with the residents of  a few project-affected villages and promised to hold a fresh gram sabha to discuss issues related to compensation, says Anil Kumar.

In May this year, Sudarsanam had requested the irrigation department to allow him to pay more compensation than is permitted under the Land Acquisition, Rehabilitation and Resettlement Act, 2013, for early completion of the project.

Naidu’s Telugu Desam Party (TDP) is an ally of the Bharatiya Janata Party (BJP)-led NDA government at the Centre. In a significant political move last month, the Naidu government dropped the word "Indira" (which stands for late prime minister and Congress leader Indira Gandhi) from the name of the project, changing the name to Polavaram Irrigation Project.