Sustained public opposition has led to a revenue loss of $17 billion for the tar sands industry in Canada, says latest report 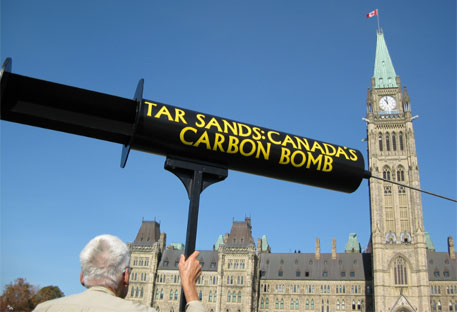 Oilsands producers had hailed the European Commission's plan in October that would have meant Canadian oil would not be penalised for being more emissions-intensive than conventional oil. But lawmakers on the European Parliament’s environment committee last week voted down the commission’s plan and resolved to stigmatise Canada's tar sands as “dirty oil”.

This has jeopardized EU’s proposed “oilsands-friendly” rules that would have allowed the bloc to import oil sands, found in vast quantities in Alberta, Canada and eastern Venezuela.

The European Commission had floated the proposal after years of lobbying by industry groups and the Canadian and Albertan governments on the EU Fuel Quality Directive, which forces energy suppliers to reduce the carbon intensity of their products, as part of a plan to cut carbon emissions to 20 per cent below 1990 levels by 2020. This compels importers to refrain from buying highly polluting oilsand products from Canada. But the new proposal no longer differentiated oil sands from conventional crude, which have lower overall greenhouse gas emissions, thus making it easier for the unconventional oil to reach the European market.

“With this proposal, Europe is deliberately opening up its market for dirty fuels, such as tar sands from Canada,” said Gerben-Jan Gerbrandy, a Dutch member of the Group of the Alliance of Liberals and Democrats for Europe, who initiated the vote against the plan. “This decision is weakening our position in the fight against climate change,” he added.

The vote to label oilsands crude as dirty, emissions-intensive oil is a “disappointment”, said Alberta’s Energy Minister Frank Oberle. However, it is not the final vote on the controversial issue. The vote was passed at committee level, meaning it still has to get through the European Parliament in the coming weeks to force the European Commission to come up with a new proposal.

Genesis of the controversy

The debate about labelling tar sands, also known as oil sands, dates back to 2009, when EU member states approved the legislation with the aim of cutting greenhouse gases from transport fuel sold in Europe by 6 per cent by 2020, but failed to agree how to implement it. In 2011, the European Commission agreed that tar sands should be given a carbon value, a fifth higher than for conventional oil. However, member states could not agree, and the Commission has been reconsidering the proposal ever since.

Environmentalists and some politicians cite research findings that over its life-cycle oil sands crude emits more carbon dioxide because of the amount of energy required to separate the crude from the bituminous deposits in which they are found. It also contains more carbon and toxic substances than conventional oil.

In a related development, a latest study by the US-based Institute for Energy Economics and Financial Analysis (IEEFA) and Oil Change International had projected that a sustained public opposition has led to a revenue loss of $17 billion for the oil sands industry in Canada. The report stated that three major oil sands projects have been cancelled due to market forces—analysts have downgraded their outlook for tar sands production—and public opposition in 2014 alone.