When botany and linguistics collide: pumpkins are fruits and there's technically no such thing as a vegetable. But try telling that to a five-year-old and see how far you get 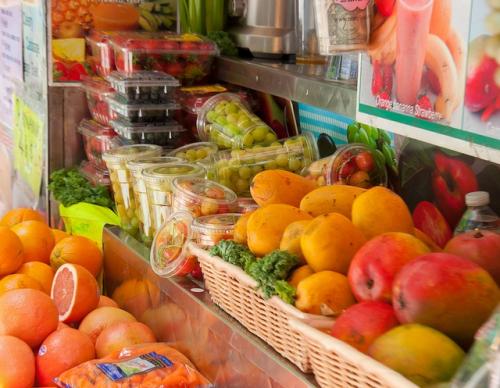 When it comes to fruits and vegetables, the most common battleground (for parents and public health experts alike) is getting people to eat them. But there’s a battle over semantics too, because many of the things we call “fruit” and “vegetables” … aren’t.

In botanical terms, a fruit is relatively easy to define. It is the structure that develops from the flower, after it has been fertilised, and which typically contains seeds (although there are exceptions, such as bananas).

But while there is no doubt that tomatoes, cucumbers and pumpkins are fruits in the botanical sense, any linguist will tell you that language changes and words take on the meaning that people broadly agree upon and use. We live in a linguistic democracy where the majority rules.

Hence a tomato is still usually called a vegetable – although many people take pride in calling it a fruit, while overlooking other “vegetables” with similar claims to fruit status. If this makes your inner pedant bristle, that’s just tough – trying telling the nearest five-year-old that a pumpkin’s a fruit and see how far you get.

Berries, by definition, are many-seeded, fleshy fruits which are often brightly coloured. They may have a soft or tough outer skin, but they must be fleshy. Oddly, strawberries and raspberries are not really berries at all, because they originate from a single flower which has many ovaries, so they are an aggregate fruit.

True berries are simple fruits that develop from a single flower with a single ovary. Tomatoes and grapes are technically berries, as are avocados, watermelons, pumpkins and bananas. Citrus fruits are also berries and their flesh is renowned for being acidic, which makes the flavour bitter.

Nuts are generally dry, woody fruits that contain a single seed. However, as you might have come to expect by now, things are not always so simple; the word “nut” is often used to describe any woody fruit. So a Brazil nut is actually a seed, whereas the walnut is botanically a “drupe” – a fleshy fruit with a hard inner layer that often persists when the flesh is lost (other drupes include peaches, mangoes and olives).

We all know fruits are good for us, but why are they typically more appetising than vegetables (certainly to kids)? Fruits are often the means by which seeds are dispersed and so the plant, in competition with other plants, needs to attract the right insect, bird or mammal to spread its seeds. This is why fruits are often brightly coloured and rich in nutrition (or at least high in sugar). It is not just humans who like a flash of colour and a soft, sweet sugar hit.

On the other hand, in the case of many leafy vegetables, plants need to protect their leaves from grazing animals and insects. The leaves are valuable and productive assets and so contain chemicals that are often unpalatable. They may be bitter or very strongly flavoured, which may explain why kids are inclined to stay away from them. Luckily, proper cooking and good recipes can often save this situation.

So if fruits are, with a few exceptions, seed-bearing organs, what are vegetables? Here the definition is less clear, because the word “vegetable” has no real botanical meaning.

To a botanist, if the word vegetable is used at all, it would simply mean any plant, in much the same way that plants are collectively referred to as “vegetation”. So we could apply the term vegetable to almost any part of any plant if we wanted to. Hence the term tends to encompass a wide range of foods, particularly green leafy ones.

Cabbage, lettuce, zucchini and cucumber are all described as vegetables (despite the latter two being fruits), and the term has generally come to refer to a specific group of plant parts that are commonly used as foods in various societies. Of course, different cultures eat different parts of different plants. But, generally speaking, in Anglophone cultures the term vegetable is used for plant materials used to make a main meal, while fruits are typically associated with breakfast or dessert.

Among the group that is loosely classed as vegetables, there are some interesting and diverse structures. Bulbs, such as onions and garlic, are highly modified shoots that develop as fleshy underground organs from which new plants can develop. They are a form of asexual reproduction, a natural kind of cloning.

The bulb contains all of the ingredients required for the production of a new plant, such as roots, leaves and flower buds. The food reserves it contains – usually starch or sugar – allow a new plant to develop rapidly at the appropriate time, hence the sweetness of onions and the fact that they caramelise so beautifully. Bulbs such as garlic can also contain pungent defensive chemicals to ward off insects or fungi.

The flowers and stems of many vegetables can also be tasty and nutritious. The flowering heads of broccoli and cauliflower are prized, as are the stems of celery and rhubarb. Once again the richness and diversity of flavours arise from the different chemicals that the plants produce to protect their valuable assets from the ravages of grazing by insects and other animals.

Tubers are formed from swollen stem or root tissue, and it’s relatively easy to distinguish between the two because stem tubers have buds, or “eyes”. Potatoes are typical stem tubers, whereas carrots are root tubers. All tubers are storage organs and last only a year. They are rich in starch, which is often readily converted to sugar to fuel the plant’s growth.

These plant-nourishing characteristics also make tubers very nutritious for us. What’s more, their high fibre content and homogeneous internal structure mean they can be cooked in a wide variety of ways: boiled, mashed, chipped, baked or roasted – even though you and I might not necessarily see “eye to eye” on which is tastiest (with all due apologies for the cheesy potato pun).

While the definitions may be debated and the words may have different meanings for different people, one thing is undeniable: whichever way you slice it, fruit and veggies are very good for you. So eat up.