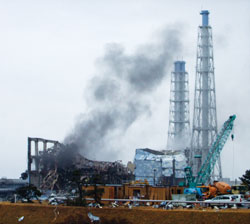 Continuing leakage of radioactive water from Tokyo Electric Company's (TEPCO) Daiichi Nuclear Plant in Fukushima is now being termed as a “serious accident” under the International Nuclear and Radiological Event Scale (INES) by Japan's Nuclear Regulation Authority (NRA). Earlier, the leakage was deemed at level 1 which is regarded as an 'anomaly' under INES. However, following the leakage of 300,000 litres of contaminated radioactive water from one of the storage tanks led the authorities to escalate the threat level to 3, which means it is a serious accident under the globally accepted scale.

On Monday, the plant operators, TEPCO found that a 1,000 tonne steel storage tank for contaminated radioactive water only weighed 700 tonnes. Later, the plant workers found small puddles around the tank in the Daiichi Plant. NRA officials on Wednesday morning while announcing the escalation of risk borne out of the leakage from TEPCO's plant in Fukushima said that it plans to approach the International Atomic Energy Agency(IAEA) on whether INES is an appropriate scale for measuring such events. TEPCO spokesperson, Masayuki Ono, in an interview to a Japanese news channel,  said the contaminated water's radiation level, measured about 50 centimetres (2 feet) above the puddle, was about 100 millisieverts (mSv) per hour. This is of grave concern because 100 mSv is the maximum cumulative exposure allowed for Fukushima plant workers over a period of five years. 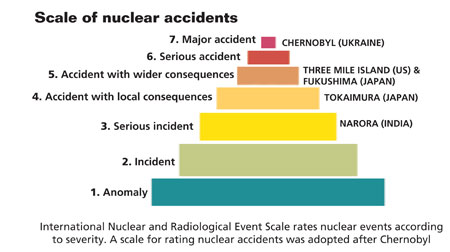 TEPCO suspects that the spillage may have been caused by a leak in the rubber seam protecting the steel tanks or through a valve connecting the gutter and the storage tank; in the past one year four tanks with similar design had leaks. TEPCO officials now say that since the storage tank is 330 feet above the sea, the leak may not pose immediate threat. However, earlier reports show that the contaminated water did enter the sea on many occasions.

Ono told the local media that leakages, including the present spillage from the steel tanks, have been mainly caused because of less durable rubber seams. Ono said that while the rubber seams were supposed to last five years, about 350 out of 1,000 storage tanks containing about 300 million litres of contaminated radioactive water may have faulty rubber seams which is causing the leakage. TEPCO officials, however, say that the tanks contain partially treated radioactive water, from which cesium and salt was removed before it was stored. It has been estimated by TEPCO that volume of the contaminated water increases by 400,000 litres a day and that the leaked water has been mixing with groundwater.

The escalation of threat level to serious accident has happened two years after a devastating earthquake followed by tsunami caused extensive damage to the Daiichi plant. Following the tsunami, meltdown was experienced in three reactors of the Daiichi plant, leading authorities to issue a level seven warning.