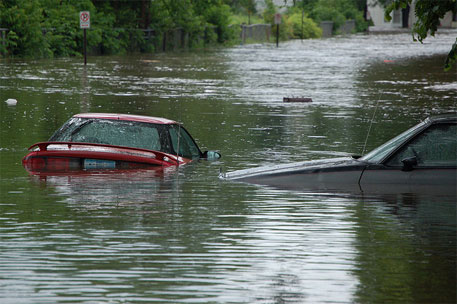 India, Bangladesh and China are at greater risk from floods, a recent analysis by the US-based World Resources Institute (WRI) has said. Besides WRI, four Dutch research groups were also involved in the study.

A WRI analysis says that approximately 21 million people worldwide are affected by river floods each year on an average. “That number could increase to 54 million in 2030 due to climate change and socio-economic development,” adds the report. This means that the number would nearly triple in 15 years.

Climate change and increase in population are the factors to be blamed for the phenomenon, according to WRI. It warned that the frequency and intensity of floods are expected to rise in many areas globally.

“There will be a huge increase in risk, especially in South East Asia,” Hessel Winsemius, an author of the study at Dutch independent research institute Deltares, was quoted by Reuters as saying.

In the US, roughly 167,000 people are affected every year due to floods. BBC reported that in the UK, about 76,000 people a year, could be at the risk of being affected by floods, if defences are not improved.

When it comes to India, almost five million people are at risk, the study said. The country had witnessed widespread floods in Kashmir and Uttarakhand in 2014 and 2013 respectively.

Effect on the economy

WRI said some 20 million people are at risk of being affected by flooding and it costs almost US $98 billion in GDP.

According to the new evaluation, in just 15 years these numbers could rise to around 50 million people with an annual potential cost to the world economy of around US $ 514 billion.

According to the World Bank, negative impact on the GDP will help to inform governments about mitigation strategies.

The Red Cross said almost half of the natural disasters they dealt with last year were caused by floods.

Countries have started working on measures to prevent floods from affecting their lives and businesses. Thailand, for instance, is experimenting with floating homes that can rise up above the waters on pontoons filled with styrofoam.

Policy and institutions in adaptation to climate change: case study on flood mitigation infrastructure in India and Nepal