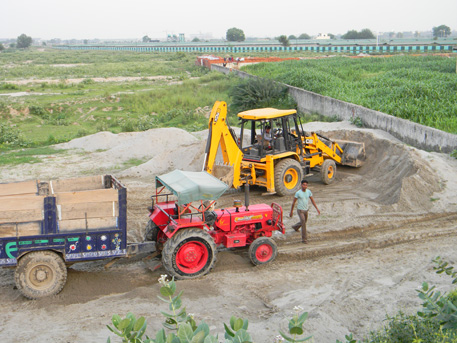 The Uttar Pradesh government claims that it suspended Greater Noida Sub-Divisional Magistrate (SDM) Durga Shakti Nagpal because it was an "administrative compulsion to ease communal tension". But the government’s claim is being refuted by none other than the residents of the village where chief minister Akhilesh Yadav feared trouble.

Nagpal was suspended on July 28, a day after she ordered demolition of a portion of a wall of an under-construction mosque in Kadilpur village in Dankaur block of Gautam Buddha Nagar. Kadilpur residents say they have never known communal conflicts. “The SDM was suspended because she was not allowing Samajwadi Party (SP) bigwigs to run mining business on riverbed,” says 40-year-old Javed Khan, who sat on dharna along with 50 other Kadilpur residents at the mosque, demanding permission to reconstruct the wall. “Nagpal was new and fearless,” Khan recalls. “The day she came to demolish the wall, she did not even listen to a single word we said and ordered for demolition. Her enmity with Narendra Bhati and Brajpal Rathi, SP bigwigs who also run mining empire, is well known in the area. She was simply punished by politicians.” 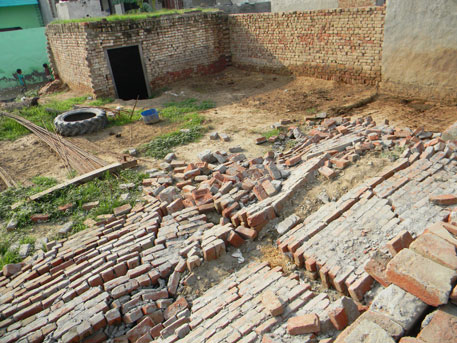 The mosque was an illegal structure and so were the two temples that were demolished in other areas of Greater Noida as part of a drive pursuant to the Supreme Court order to demolish religious structures on public land. This mosque was, however, special since Narendra Bhati, chairperson of Uttar Pradesh Agro Corporation, had donated Rs 51,000 for its construction. Sources say Nagpal’s enmity with Bhati started with her lodging an FIR against one of his supporters who did not abide by the terms of a government sand auction that he had won.

Kadilpur residents say what peeves them about the demolition is that they had collected money bit by bit for years to build the mosque. “Donations from poor villagers, their relatives, our friends and so many other people added up and we started building the mosque. But the SDM demolished it without even serving us a notice. How will we collect the money again?” asks Chaman Khan, another protester. Kadilpur lies only a few kilometres from the Formula One race tracks, but it remains waterlogged for most of the year and has no hospitals or schools.

About seven to eight kilometers from Kadilpur and just opposite Gautam Buddha University on the highway, a road leads to Gharbara. The place is known as the haven for illegal sand miners. An elevated road (pushta) runs almost parallel to the Yamuna. At the mouth of the narrow kuccha roads that join the main pushta along the river stand groups of six to seven men armed with country pistols and lathis. They keep an eye on each and every outsider who walks on the pushta. 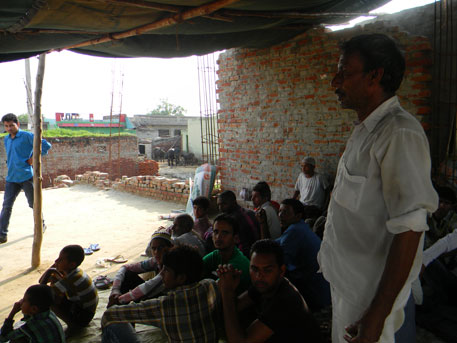 “It is not at all safe to go there,” warns a journalist who works with a regional newspaper. “Last time when I went there, the goons pointed a gun at me. Because of the ongoing trouble, these men have been ordered to simply kill and bury suspicious people. I asked the officer-in-charge of the local police station to send some officers with us, but he refused.”

An activist protesting illegal sand mining in Noida, Mangeram, was shot dead on July 31 by sand mafia in Sector 39 of Noida. Mangeram had filed a complaint against members of sand mafia a few days ago.

Around three years ago, the mining mafia had fired at the then SDM Vishal Singh who had escaped unhurt as the bullet had misfired. Five months ago, the mafia had fired shots at mining officer Ashish Kumar. He had a narrow escape.

Nagpal is known to have fearlessly taken action against the mafia. Between February and July 24 this year, officials under the supervision of Nagpal seized 274 dumpers carrying illegally mined sand. Her operation against illegal mining had gained momentum towards the end of July. Between July 18 and 24, about 40 vehicles, such as dumpers, tractors and trolleys, were seized. Some of these vehicles belonged to powerful politicians who backed the mining mafia.

According to an official of the mining department, 66 FIRs were lodged in the past six months and 104 people were arrested. Total 81 machines involved in illegal mining, including cars, two-wheelers, earth movers and trucks, were seized. Nagpal collected fine to the tune of Rs 54,30,000 from illegal miners from February to July. She had reportedly put together various groups that conducted frequent raids day and night in areas where illegal mining was rampant. On July 25, mining officer Ashish Kumar who assisted Nagpal in these raids was transferred to Bulandshahr. Three days later, Nagpal was suspended.

“The mining has stopped for now,” says Lalu, a resident from Atta Gujran village. “Not because of Nagpal but because most of the places from where miners were digging sand were inundated after the water level of the Yamuna rose in the last week of June.” 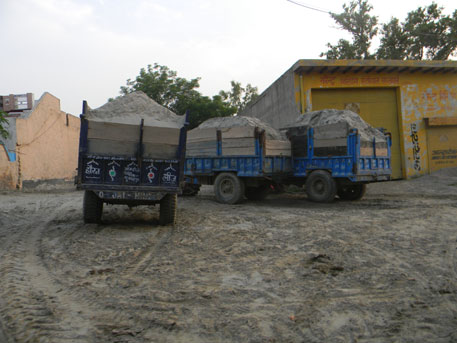 However, four to five km towards from the river from the main pushta, tractor tracks in the soft mud seem fresh. Mining is still going on discretely. Atta Gujran village on the banks of the Yamuna serves as what the miners call “stock”. The mined sand from the riverbed is bought to the village where it is collected for a day or two. From here the sand is transported to other places. Hundreds of lorries and trolleys filled with fresh sand with water dripping can be seen parked in the village.

“The owners of the fields near the river are mostly from Haryana. They take Rs 600 for trolley full of sand mined near their field,” says Lalu.

Lalu further adds that it is because of sand mining that a proposed bridge across the Yamuna, connecting Uttar Pradesh and Haryana, is yet to be completed. The bridge was supposed to be constructed 10 years ago. Though foundation stone for the bridge had been laid several times in Haryana, the work has still not begun. “Once the bridge connects the two sides, the miners from Haryana would pay the field owners, also from Haryana, money for the sand. They would extract the maximum and the lobby operating this side would suffer losses,” says Lalu. Several people in Atta Gujran have relatives in Ghorasan and Gharora in Haryana but in the absence of the bridge, they have to travel 60 km extra.

Meanwhile, as the Uttar Pradesh government prepares to file a charge sheet against Nagpal, Nutan Thakur, a social activist, has filed a public interest petition in the Allahabad High Court questioning the suspension of Durga Shakti Nagpal. The petition is likely to be heard on August 1.