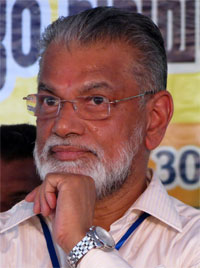 For the first time in recent years, an Indian scientist working in India has been chosen as one of the top scientists of the year.

Science journal Nature, in a recent announcement, has named ISRO chairperson K Radhakrishnan as one of the 2014 top 10 scientists for his contribution to the Indian space odyssey.

In September 2014, India's Mars Orbiter Mission or Mangalyaan joined three other orbiters of European Space Agency and NASA in the orbit of the Red Planet. With this, India became the fourth country to have achieved the feat and the first country to have done this successfully in the first go. The mission aims to enable scientists to better understand how Mars transformed from a once water-rich planet to today's drier, colder and less hospitable world.

However, this was not the only success that India tasted in the domain of space exploration. On December 18, the national space agency had successfully tested an unmanned crew module on board an experimental mission of its heaviest rocket GSLV Mark-III.

Apart from Radhakrishnan, another Indian-origin researcher, Radhika Nagpal, has been featured in the prestigious list. She has been recognised for using biology-inspired robotics to get a swarm of 1,024 robots to assemble and form various shapes.

Other scientists recognised by Nature:

Suzanne Topalian: A clinician who helped in pioneering PD-1 inhibitors, a new class of drug therapy for cancer. She always believed that cancer immunotherapy would work

Sheik Humarr Khan: A doctor from Sierra Leone who became a part of a team of scientists who carried out the first genetic sequencing studies of the Ebola virus. He turned down an invitation to leave his country so that he could stay and treat patients. He also became one of its many victims, dying on July 29, 2014

David Spergel: The astrophysicist who found errors in the evidence provided by a team of scientists that they had probably detected gravitational waves from space

Maryam Mirzakhani: The first female mathematician to win the Fields Medal, the equivalent of a Nobel in mathematics
Pete Frates: A former university baseball coach who started the Ice-Bucket challenge to raise funds and awareness for combating amyotrophic lateral sclerosis, a neuro-degenerative disorder

Masayo Takahashi: An ophthalmologist, who successfully tested the safety and efficacy of using induced pluripotent stem (iPS) cells, which are adult cells genetically reprogrammed to an embryonic stem cell, to treat blindness. She injected hope into the stem-cell field during a troubled year

Sjors Scheres: A biologist who developed a software called RELION, which can produce extremely detailed 3D reconstructions of molecular machines which are components of molecules responsible for mechanical movement. By doing this, he brought the cell's molecular machines into sharper focus