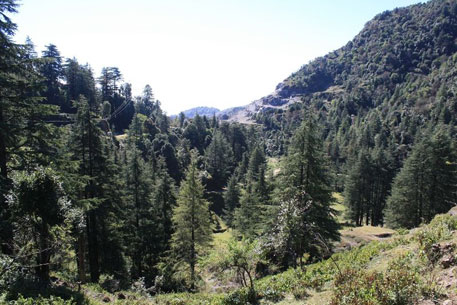 While extreme weather and unregulated planning are being blamed for the devastation caused by the Uttarakhand floods, deforestation is regarded as another factor. This aspect of the Uttarakhand disaster, however, is more complex than it appears. The worst affected districts of Chamoli, Pithoragarh, Rudraprayag and Uttarkashi are the areas where maximum forestland has been diverted for development activities.

Statistics from the Forest Survey of India (FSI) show there has hardly been any forest loss in Uttarakhand for the past 10 years. The forest cover in the state has, in fact, increased from 23,938 square kilometre in 2001 to 24,496 sq km in 2011. This data is used by governments, both state and Central, to deny allegations of mismanagement of forests in the state. Official figures, however, fail to quantify the damage forest eco-systems might have suffered in the state due to development projects.

As per data from the Union Ministry of Environment and Forests (MoEF), 44,868 ha of forestland have been diverted to non-forest use in Uttarakhand since 1980. Of this, a maximum of 9,500 ha has been diverted for construction of roads, followed by 5,500 ha for hydel projects and 3,100 ha for transmission lines. Most of the forest diversion (68 per cent) in the state has taken place after the formation of the state in 2000. 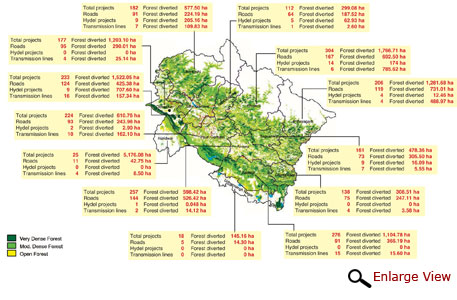 Under the Forest (Conservation) Act, 1980, a project developer is supposed to plant trees in a non forest area equal to the forest area it is clearing, or on degraded forest land which is double the project area, to compensate for forest loss. However, compensatory afforestation seems to be ineffective in the state. In lieu of all the forest cleared in the state so far, compensatory afforestation in 32,174 ha land has been stipulated. Only 12 per cent of this has been achieved so far. The plantation is done at a different location, sometime even in a different state (Uttar Pradesh in case of Uttarakhand), which hardly makes up for the ecological disturbances at the place from where vegetation has been removed.

Native vegetation loss not accounted for

The extensive plantation outside the compensatory afforestation schemes and the natural regeneration of forests might have kept state’s area under forest cover constant. But it would not compensate for the removal of vegetation from eco-fragile patches.  “At the macro level there might not be any change in the forest cover, but one can’t deny this at the micro level. The forest area has increased at some places and decreased at several other places,” says an FSI official.

Shalini Dhyani, project scientist with the Gujarat Institute of Desert Ecology, who has extensively worked on forest ecology of the Himalayas in Uttarakhand, explains this phenomenon. “The forest has regenerated manifold in the state because of great community conservation work. In valleys like Pauri and Shrinagar, regeneration has improved as people have migrated from these areas. However, in the upper reaches, huge chunks of forest have been sacrificed for roads and dams,” she says.

This has disturbed the ecological balance of the hills, say experts. “Forests that have been removed from these districts have native Himalayan vegetation. With deforestation, there is a huge loss of top soil. The soil erosion and resultant rise in temperature further affect the health of the nearby forests. This must have made the already fragile eco-system of Himalaya even more unstable,” says A S Rawat, a Nainital-based forest historian.

Such deforestation has aggravated the impact of floods in the state, says Dhyani. “Wherever there has been intact forest, the damage from floods has been much less than where it has been diverted to non-forest use. For instance, in Kedar Valley there have been very few landslides as the native oak forests of the region have great soil-binding capacity and water retention power. The damage here has been only due to the cloudburst, unlike in the Valley of Flowers, Nanda Devi Biosphere Reserve and regions around Joshimath where the villages have been devastated by to landslides along with the cloudburst. The forests in these regions have suffered great loss in the past seven to eight years because of development projects,” she says.