Film shows the disastrous effects that climate change, pollution and overfishing are having on the oceans 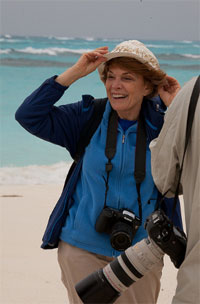 Oceans have been the focus of much debate and discussions this year. While the UN has opened up large areas for deep sea mining, something scientists have warned against,  the Global Ocean Commission has called for a five year deadline to save oceans from overfishing and pollution. The film, Mission Blue, therefore, could not have been better timed to draw the world's attention to the deteriorating condition of the seas.

Currently showing at select theaters in the US, the documentary film charts the journey of well-known oceanographer Sylvia Earle  across the globe to save its blue wealth. The film shows the disastrous effects that climate change, pollution and overfishing are having on the oceans through Earle's eyes.

“I really wanted to make people aware of this woman and her life because she is such an incredible person and has dedicated so much of her life toward the ocean,” Fisher Stevens, 50, who co-directed the film with Robert Nixon, said in an interview, reports Reuters.

The film also details the story of Cabo Pulmo, a village in Mexico where fishermen made a good living until the fish disappeared. Years after fishing was stopped the ocean recovered and the area attracts eco-tourists. “Now all the fishermen own tourist boats and they take them out diving and they have a whole other life,” Stevens told the news agency.

Earle is a former chief scientist for the National Oceanic and Atmospheric Administration and has won many honours, including the Royal Geographical Society Gold Medal. In 2009, Earle won a TED Prize. With TED's support, she launched Mission Blue, which aims to establish marine protected areas, dubbed "hope spots", around the globe.

(You can watch the trailer of the film here on Netflix site).