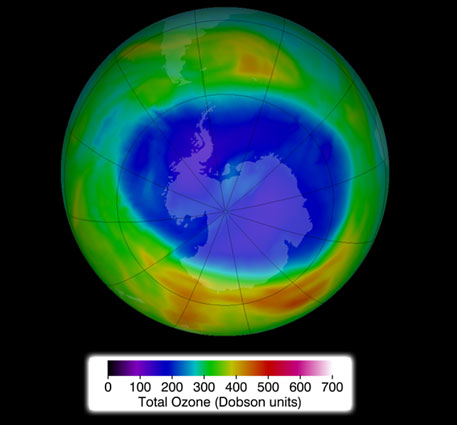 The ozone hole over Antarctica reached its annual peak size of 24.1 million square kilometres on September 11, 2014, according to scientists from National Aeronautics and Space Administration (NASA) and the National Oceanic and Atmospheric Administration (NOAA).

According to this report, the hole was roughly the size of North America. This size, however, is lower than the large holes recorded during the period from 1998-2006.

The largest ozone hole recorded on a single day was on September 9, 2000, when it reached 29.9 million square kilometres.

NASA reports that the 2014 level of ozone-depleting substances, like chlorine-containing chlorofluorocarbons, is 9 per cent lower than the maximum recorded in 2000.

“The ozone hole area is smaller than what we saw in the late-1990s and early 2000s, and we know that chlorine levels are decreasing. However, we are still uncertain about whether a long-term Antarctic stratospheric temperature warming might be reducing this ozone depletion,” he added.

Scientists are now trying to determine if temperature increases or chlorine decreases are behind this trend. High chlorine levels have been leading to the expansion of the Antarctic ozone hole during August and September every year since the 1980s.