Ozone layer recovery can be speeded up

As the levels of ozone depleting substances continue to decrease because of compliance with the Montreal Protocol, ozone layer may heal 11 years earlier than predicted 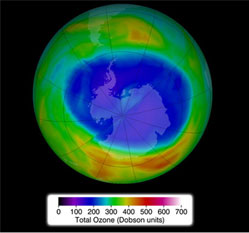 An assessment by nearly 300 scientists from 36 countries says that the recovery of the ozone layer—a bluish gas that shields life on Earth from harmful ultraviolet rays—can be speeded up if countries fast-track elimination of production of ozone-depleting substances (ODS), says a news release by UNEP.

The success of the Montreal Protocol in reducing ODS is such that people hardly ever think about the ozone hole as a problem anymore. According to the latest report of NASA, ozone layer is well on its path to recovery and the size of the ozone hole is much smaller than it was in the 1990s.

The report states that if the parties to the Montreal Protocol were to expedite the phase out of Ozone Depleting Substances (ODS), the ozone layer regeneration would be accelerated by 11 years. The ozone, by 2050, report says, could very well be restored to its 1980 levels—the time before substantial ozone depletion was observed.

At the Paris meeting, the chairs of SAP presented the report and its findings that mainly focused on ODS and the changes in the ozone layer. The quadrennial assessment also highlighted some emerging issues like the contribution of hydrofluorocarbons (HFCs) to climate change.

Threats to ozone recovery
The report also found other threats to the recovery of the ozone, such as the persistence of carbon tetrachloride and methyl bromide despite their phase out.

Carbon tetrachloride levels in the atmosphere seem to have increased in the past 10 years despite its phase out, indicating proliferation of illegal trade. Methyl bromide is chiefly used as a pesticide and is internationally listed for phase out in all commodity and soil uses and other uses with some exceptions. It is also currently used in quarantine and pre-shipment, but that might change in the near future.

Ozone recovery is the direct result of the phase out of chemicals having deleterious effect on the ozone. The Protocol has resulted in the elimination of over 2 million metric tonnes of ODS due to concerted regulatory actions by all 196 signatories to the international agreement. The current hydrofluorocarbons (HCFC) phase-out is under way in developing countries and about 640,000 tonnes of HFCFs remain to be phased out. Montreal Protocol has resulted in the reduction of about 11 billion tonnes of CO2 equivalent gases every year.

Probably, the most critical assessment made by this panel is how the HFCs threaten to dislodge the climate benefits accrued under the Montreal Protocol. Montreal Protocol avoided their build up and is reducing their abundance; thus, it has helped reduce the climate-forcer. HFCs are some of the most notorious green houses gases.

The SAP has provided inescapable logic that large contributions of HFCs to climate change can be avoided by using low-GWP (global warming potential) alternatives.