What compelled people to opt for NOTA this election

In Uttar Pradesh’s Sambhal, the total NOTA votes exceeded the victory margin in the constituency 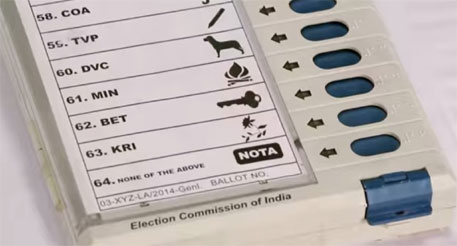 NOTA or none-of-the-above option introduced for the first time in this Lok Sabha election, has garnered 5.9 million or 1.1 per cent of country’s votes. Interestingly, this share is more than that managed by parties like the CPI and Janata Dal (United).

NOTA, often considered as a waste by election officials, came into force in 2013 with a campaign on right to express dissatisfaction with all candidates contesting from a particular constituency. In a few areas this dissatisfaction could also be attributed to the dismal state of development. According to an interesting study done by The Hindu group of publications on NOTA, on an average about 10,000 NOTA votes were cast in each constituency in the 16th Lok Sabha elections. “Over twice as many NOTA votes were cast in Scheduled Tribe (ST) constituencies than in ‘general’ constituencies,” the Hindu report says.

Green concerns stoke resentment
Nilgiris, a Scheduled Caste constituency in Tamil Nadu, has the highest number of NOTA votes (46,559) cast in a single constituency. 2G scam-tainted A Raja, the sitting MP from Nilgiris constituency lost this seat to AIADMK rival C Gopalakrishnan. According to environmental and tribal activist from Tamil Nadu, C R Bijoy, forest rights and land entitlement issues are affecting most of the people in this region.

In at least 24 out of the 40 Lok Sabha seats in Bihar, the NOTA pulled more voters than candidates of some major parties and about 581,000 voters out of 62.1 million voters in the state used NOTA. According to statistics from the Election Commission of India, NOTA tally was highest in Samastipur (SC) seat with 29,211 votes. Samastipur was one of 38 districts of the state that were declared drought-hit in 2013. Sand mining is another issue the region grappled with.

But the most surprising case that of NOTA, the virtual candidate, getting more votes than any party candidate. In Uttar Pradesh’s Sambhal constituency, the total NOTA votes polled were 7,658, while the victory margin of the winner (Satyapal Saini of BJP) was 5,174 votes. In the state, 5,92,211 people in total had decided to refuse all the candidates and exercise NOTA. The Naxalite-affected seat of Robertsganj in the state saw 18,489 voters exercising the NOTA option, which came sixth in the parliamentary seat.
Incidentally, in Gujarat, according to an analysis done by environmental and social activists, Rohit Prajapati and Trupti Shah, areas casting high number of votes have environmental and forest-related issues. In Dahod, NOTA was at third position with over 32,000 votes.

In Bastar constituency in Chhatisgarh, NOTA occupied third position with 38,772 votes. Dinesh Kashyap of Bhartiya Janata Party won this seat by defeating slain Congress leader Mahendra Karma’s son, Deepak, by 120,000 votes. Considered as a Maoist hub, Bastar faces several environmental and developmental issues. However, in case of Meghalaya, according to anti-mining activist, Arwat Challam, people did not felt represented by any of the candidates so they chose NOTA.

In Punjab, NOTA put national parties like Communist Party of India (CPI), Communist Party of India (Marxist) and regional player like SAD (Amritsar) to shame. With  58,754 voters having chosen to reject all the candidates, these parties trailed behind NOTA in all 13 parliamentary constituencies of the state. Punjab is a state which activists say may lose an entire generation to drug abuse and has also been shadowed by increasing cancer deaths.

(With inputs from Vani Manocha)