Why climate negotiators should look at wind energy prospects 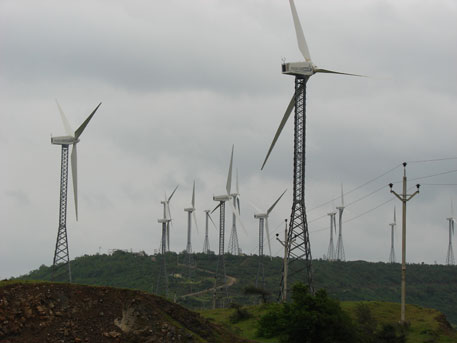 Underscoring the potential of wind sector to reduce greenhouse gas emissions, the Global Wind Energy Outlook 2014 (GWEO 2014), released almost a month ahead of the global climate summit scheduled to be held in December, calls for a strong international and national political commitment to tackle climate change challenge and ensure enhanced energy security. This 2014 edition of the biennial report, which has global projections for wind energy sector, says that wind power capacity could reach nearly 2,000 GW by 2030 and supply between 16.7-18.8 per cent of global electricity; it can help save over 3 billion tonnes of carbon dioxide emissions annually.

The report was released by the Global Wind Energy Council  (GWEC), an international trade organisation for wind power industry, and Greenpeace International.

2015 will be a critical year for the wind and if the global leaders strike a climate deal in Paris next year, the total installed capacity is projected to reach roughly 600GW worldwide by 2018, says the report.

This GWEC report presents three visions of the future of the global wind energy industry—up to 2020, 2030 and 2050—based on existing and future emissions reduction and renewable energy policies.  The scenarios compare the International Energy Agency’s  central scenario from its World Energy Outlook report  with a “moderate” and “advanced” scenario developed especially for this report, detailing how the global wind industry might deliver in terms of global electricity supply, CO2 emissions savings, employment, cost reductions, and investment.

After witnessing a growth of 40 per cent (over the year 2008), the wind sector added just 38 GW in 2009; its growth stagnated thereafter due to the economic crisis, low growth in wealthy countries, and policy instability.

Wind energy installations, totalling 318 GW globally by the end of 2013, provided about 3 per cent of the global electricity (See ‘Global cumulative installed wind capacity: 1996-2013’). But with strong growth witnessed by the wind sector in China in 2013, and with recovering markets in the US and India seeking to exploit wind to ensure enhanced energy security and access, the sector could rebound.

It will play a significant and major growing role in electricity supply, says the report.  GWEC projects 45 GW of wind power this year. Another report by GWEC released this year projected 45-48 GW of wind power for the year with some upside (see ‘Why will 2014 be significantly better for the wind than 2013?’).

According to global wind energy advanced scenario, 4,000 GW of wind power could meet 26 per cent of global electricity demand and help save 6 billion tonnes of carbon dioxide annually. The report expects a lot from the global economic and climate leaders, and stresses on a robust climate deal in Paris climate summit  with impressive future overview of the wind sector. It projects that the installed wind capacity could reach 800 GW by 2020, nearly 2,000 GW by 2030 and over 4,000 by 2050.

So 2015 will be a critical year for the wind industry, for the climate negotiators and leaders.

The report is very optimistic that with right national and international policies and road map, even under the moderate scenario, the international wind energy could meet 7-8 per cent of global electricity demand by 2020, 13-15 per cent by 2030 and 17-20 per cent by 2050. 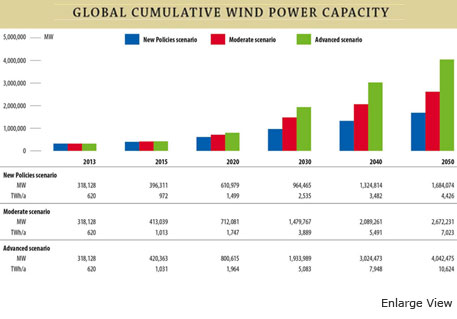 China and India could lead the way

The report projects that India and China will account for about half of global energy demand growth through 2040, with India’s energy demand growing at approximately 2.8 per cent per year. Both the countries will focus on renewable—solar and wind. With effective national policies and political will for implementation, China along with India could capture 34 per cent of the global wind market, says the report. Referring to the ambitious target of 10GW per year market set by the Indian government, GWEC head Steve Sawyer seems to be very optimistic and looks forward to an exciting and ambitious growth for this industry in India (see ‘Global Wind Grows 12.5 per cent in 2013’. 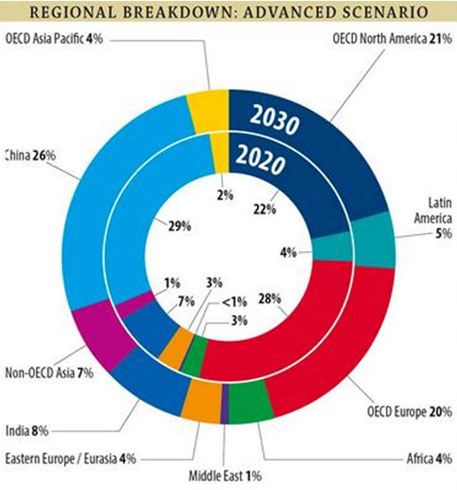 As per advanced scenario, by 2020 India could have 56 GW of wind power supplying137 terrawatt hours (TWh) of electricity each year and save 82 million tonnes of carbon dioxide emissions each year. The sector could also provide employment to over 123,000 people.

GWEC has identified Brazil, Mexico and South Africa as the regions with big growth in wind sector. It says that Brazilian industry is set to install nearly 4 GW in 2014 alone. Energy reforms in Mexico have set the country on course for a 2GW/annum market for the next 10 years. With very good growth in 2014, the wind sector has a bright future in South Africa, too. By 2020, South Africa could have around 21GW of wind power, producing 55TWh of electricity that is projected to grow to 86GW producing 226 TWh of electricity by 2030.

The report includes global projections for ten regions across the world.  Here is a glimpse of ambitious projections in the report as per the advanced scenario.

Besides contributing to reducing carbon emissions, the wind sector also seems to be gaining political and economic significance, says the report. It highlights wind energy sector’s potential in creating a large number of skilled, semi-skilled and unskilled jobs. From global south, the  NRDC-CEEW analysis released in August, too, has highlighted the critical role of India’s solar and wind programmes for the much needed energy access and employment opportunities in the country.

Renewable sources such as solar, wind and hydropower could meet almost 80 per cent of the world's energy demand by 2050 with the right policies, a UN report released in May 2011 had said. Continued increase in the size and therefore energy capture of individual wind turbines have reduced the levelised cost of landÃ”Ã‡Ã‰based wind energy and improved the prospects for future reductions in the cost of offshore wind energy, stated the IPCC report on climate mitigation in December 2013.

Two new reports released by the EU  and the US Department of Energy,  too, show wind energy to be amongst the lowest cost options for reducing carbon emissions.

This big wind picture for enhanced energy security and the climate benefit demands national and global commitment specially from the political leadership and the global climate negotiators. The climate actors and leaders who would be meeting at Lima in December 2014 and at Paris in December 2015 must consider this while developing the climate-mitigation action plan to contribute to an energy-secure world.

Watch this film:  What’s Possible? The film was presented to world leaders at the United Nations Climate Summit in New York, this short inspirational film shows that climate change is solvable.

Unleashing the potential of renewable energy in India