Scientists say pollution from Asia is likely leading to stronger cyclones in the mid-latitudes of the Pacific, more precipitation, and a faster movement of heat from the tropics toward the North Pole 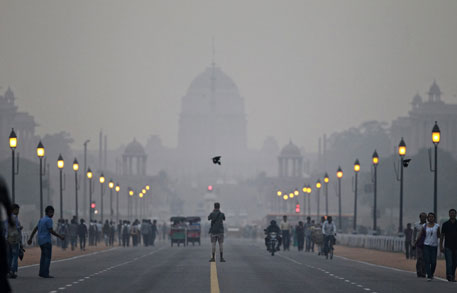 Air pollution over China and other Asian countries could be intensifying storms over the Pacific Ocean that influences weather over much of the world.

In the new study, published in the Proceedings of the National Academy of Sciences (PNAS), scientists used advanced computer models to study interactions between clouds and fine air-borne particles known as aerosols, particularly man-made ones such as those emitted from vehicles and coal-fired power plants. The team said that tiny polluting particles were blown towards the north Pacific where they interacted with water droplets in the air. This, the researchers said, caused clouds to grow denser, resulting in more intense storms above the ocean.

"Since the Pacific storm track is an important component in the global general circulation, the impacts of Asian pollution on the storm track tend to affect the weather patterns of other parts of the world during the wintertime, especially a downstream region (of the track) like North America," Wang has been quoted as saying in media reports.

The scientists say pollution from Asia is likely leading to stronger cyclones in the mid-latitudes of the Pacific, more precipitation, and a faster movement of heat from the tropics toward the North Pole.

The study abstract says: “Our work provides, for the first time to the authors' knowledge, a global multi-scale perspective of the climatic effects of pollution outflows from Asia."

Parts of Asia have some of the highest levels of air pollution in the world. In China's capital, Beijing, pollutants frequently reach hazardous levels, while emissions in the Indian capital, Delhi, also regularly soar above those recommended by the World Health Organisation. Delhi, in fact, has been lagging behind Beijing in cleaning its air. The city is fast replacing Beijing in notoriety as the iconic face of the Asian growth story and its pollution aftermath.

Report: Towards an action plan for near-term climate protection and clean air benefits