Pollution may be higher in Kolkata this Diwali 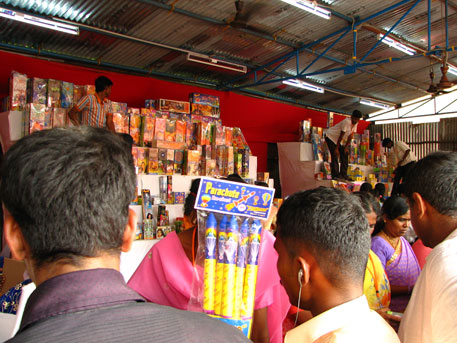 Everytime a firecracker is burst on the road right next to the maternity ward of Kolkata’s Lady Dufferin Victoria Hospital in congested Bow Bazar area of Kolkata, Ninnita Saha is forced to cover her newborn baby’s ears. Ninnita wants to leave the hospital as early as possible. This is also the hospital where noise limit crosses 80 decibels (dB) on a regular day because of heavy traffic on the nearby road.

With norms recently relaxed for firecrackers in West Bengal, noise levels are expected to rise even higher in residential and commercial areas in the city.

The National Green Tribunal (NGT), in a recent order, had directed the Union Ministry of Environment and Forests (MoEF) and the Central Pollution Control Board (CPCB) to conduct a national-level study on noise during manufacture and bursting of firecrackers by next February.

The order was in response to a bunch of petitions filed by firecracker manufacturers, traders and buyers in West Bengal, challenging the state pollution control board’s notification of 1997. The notification permits only 90dB sound at a distance of 5m from the point of bursting a cracker.

This is a more stringent noise standard than the one prescribed in MoEF’s notification dated October 5, 1999, which permits 125dB sound at distance of 4m. The tribunal has ordered that the MoEF notification will hold good till a fresh study is conducted.

This relaxation by NGT legalises use of 100-odd varieties of firecrackers in West Bengal, which were previously in the banned category. These include — chocolate bombs, kalipatkas, dhanipatkas, chain crackers, seven shots, rocket bombs and dodomas.

The sale of crackers, however, has been quite low this year, as compared to previous years; not because of the norms or the West Bengal Pollution Control Board’s awareness drives but because of dampened mood in the state, following incessant rains.

In October 1996, the Calcutta High Court had banned the sale or manufacture of firecrackers which generated noise more than 65dB (at a distance of 5m) in the state. Thereafter, the state pollution control board (SPCB) started rigorous monitoring of noise levels during festival seasons. Responding to a few more petitions, the high court modified its order in June 1997 and permitted manufacture of firecrackers which generate more than 65dB of sound, but allowed them to be sold outside the state only. The court also clarified that in case of violation of the order, police will confiscate the firecrackers and the raw material used in their manufacture.

Dealers’ association of firecrackers in the state then filed an appeal against the order, following which the high court relaxed the noise limits to 90dB (at 5m from the point of bursting a cracker). In the same year, SPCB too issued the same limit in a notification. Experts say that sound with 90-100dB noise levels, for more than a minute, can break a wine glass.

While relaxing the noise limit, the court also suggested constitution of a national committee on noise pollution control to determine noise limits. The committee, constituted following the order, recommended a permissible noise limit of maximum 125dB at 4m from the point of bursting a cracker. The recommendations of the committee were approved and MoEF passed a notification on October 5, 1999.

Regardless of the set limits, efforts to restrain people from using banned firecrackers have always fallen flat in Kolkata. The illegal firecrackers that are banned by the SPCB in Baazi Bazaars, special stalls set up in various parts of the city to sell only legalized fireworks, manage to find their way into suburb markets and shops in the main city.

Local police seldom take any action to seize the banned firecrackers. Worse, they do not know anything about permissible decibel limits. Whether it is 90 dB or 100 dB, both mean the same to police officials in areas like Maheshtala, Budge Budge, Sonarpur and Champahati, located on the outskirts of Kolkata.

In 2010, a four-member team of scientists, from the pollution control board, went to raid a few markets in city suburbs of North and South 24 Parganas. In Nungi, they were mobbed by traders, who had been selling illegal firecrackers. Even in Narayanpur-Nilpur, the team had to face traders’ ire. In both the searches, the police officers accompanying the scientists were unable to control the situation.

A noise pollution expert, heading the team, said, “We had found that almost all the shops in these places had been selling banned firecrackers. When we went to seize them, we were mobbed and were forced to retreat. The policemen, who had then assured us that they would seize the items failed to confiscate most of the banned crackers.

During the last few festive seasons, despite the stringent limit of 90 decibel level being in force, the noise level in the city had almost touched 100 decibel because of high use of firecrackers. Bonani Kakkar, India president of an NGO called People United for Better Living in Calcutta (PUBLIC), believes that this year ambient noise levels in residential areas, which cannot exceed 55 dB during the day and 45 dB at night, are expected to rise by three to four times.

According to local reports, nurses at the B C Roy Memorial Hospital for Children have been complaining for the past three years that children shake with fear at the sound of firecrackers, burst on the night of Kali Puja. This causes saline needles inserted in kids’ arms to come off. At Balananda Brahmachari Hospital in Behala, the ambient noise level just outside the ICU had crossed 90 dB on the night of Kali Puja last year.