What will be the outcome of scrapping the US Clean Power Plan on its INDC?

Will it be possible for President Barack Obama to maintain his so-called climate legacy? 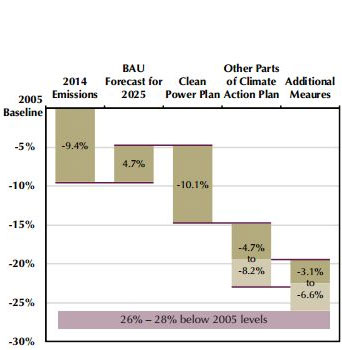 It is interesting to see how the sudden demise of Antonin Scalia affects the US Supreme Court’s decision on the implementation of the US Clean Power Plan (CPP). Scalia was one of the five out of nine judges who had ruled in favour of blocking the CPP.

The Supreme Court’s decision means that the Environment Protection Agency will not be able to enforce the rules listed under the CPP until and unless the court decides on its legality. If the court decides to scrap the CPP, it would be major blow to President Barack Obama’s climate legacy.

The CPP is crucial for the US to meet its emissions reduction targets of 26-28 per cent by 2030 from the 2005 levels. The plan aims to reduce power sector emissions by 30 per cent below the 2005 levels by 2030 while delivering US $ 55-93 billion in annual net benefits from reducing carbon pollution and other harmful pollutants.

It is estimated that the CPP accounts for about 10 per cent of the reductions (see figure1) committed under the US INDC (Intended Nationally Determined Contributions) submitted in 2015.

Scrapping this plan may mean an increase in the global emissions by 680 million tonne of carbon dioxide equivalent. This is equal to about a fourth of India’s emissions in 2012. Most of the energy efficiency and emission reduction improvements under this plan will be economically motivated. These would include technological improvements and fuel changes from coal to gas in a number of power plants across the US.

Delhi-based non-profit Centre for science and Environment had earlier published a detailed report on the US climate action plan titled Capitan America. According to the report, the electricity sector emissions in the US reduced 1.8 per cent annually (2005-2014) mainly due to the switch from coal to natural gas.

Under the CPP, it will reduce only by 1.6 per cent from now on till 2030 which is worse than the business as usual. Even in 2030, about 60 per cent of US electricity will be produced from coal and gas.

Another key proposal that Obama has made in his so-called climate legacy involves reducing emissions by moving away from high global-warming gases—hydrofluorcarbons (HFCs) used mainly in refrigeration and air conditioning systems industry across the world.

It is proposed that phasing down HFCs will help in reducing 0.5 degrees Celsius by end of the century. Last year in Dubai, the US has been a major player in pushing hard for implementing the HFC phase down. The US stand on climate change is largely based on business interests of the associated industries and will not necessarily mitigate the emission impacts.