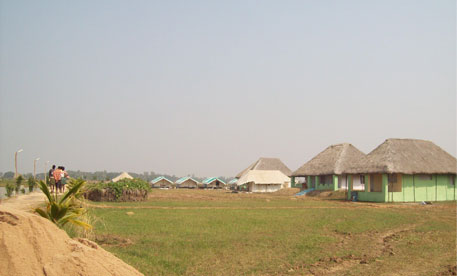 Cyclone Phailin that hit Odisha on October 12 and the floods which followed have taken a heavy toll on tourism in the state which is already reeling under Maoist violence.

“Large number of foreign tourists cancelled their bookings,” said Sanghamitra Jena, a tour operator with Eastern Treasure India Tour. Jena, who runs a Nature Camp in Bhitarkanika, said, "Images of terrible devastation in the flood-and-cyclone-affected areas of Odisha have left many under the impression that the whole of the state is battered by floods. They don't realize that the problem is restricted to only a few places," she added.

“Many people who had made their bookings to visit Bhitarkanika National Park months in advance have cancelled their plan,” said Kedar Kumar Swain, the divisional forest officer (DFO). Bhitarkanika, which usually gets around 30,000 tourists in the month of October only, looks deserted now. Only 2,000 tourists have visited this biodiversity hot spot this month.

Pranab Kumar Das, who lives near Ratnagiri Buddhist site, said that the floodwaters have kept many visitors away from this location in Jajpur district.

“At a time when we were looking for heavy inflow of tourists, the calamity has left us in the lurch," said Bijaya Kumar Patnaik, vice-president of Odisha Tour Guides Association.

“Ganjam is the worst-affected area and the government is trying its best to restore connectivity to all areas which have been cut off by floods. We are hopeful that tourists will come to all these sites soon as the authorities are determined to complete the needed reconstruction at the earliest possible,” said Maheswar Mohanty, tourism minister of Odisha.

"The growing Maoist menace in Odisha's tribal dominated districts of Koraput, Kalahandi, Rayagada, Keonjhar,Malkangiri and other areas has not only claimed lives of people, it has dealt a big blow to tourism in tribal areas. The cyclone is another blow for us now, added Bijaya Kumar Patnaik.