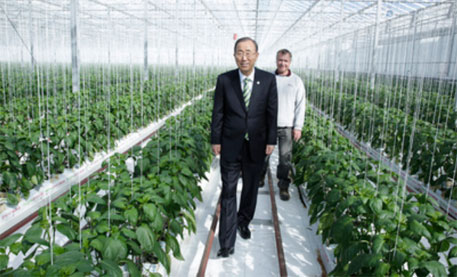 Two decades of climate conferences and numerous scientific warnings about dire consequences of climate change have done little to check global greenhouse gas emissions from rising. So, what’s so special about this round of talks called in New York on September 23 that do not even fall within the processes of the UN climate negotiations?

Convening a meeting of world leaders again after the Copenhagen debacle when rich nations led by the US sabotaged all progress in climate talks till then is a risky strategy. But it is seen by the United Nations as an imperative to prepare the groundwork for the crunch meeting in 2015 at Paris where world governments will strive to forge a new climate deal that will cut global greenhouse gas emissions after 2020.

UN Secretary General Ban Ki-moon has convened the high level meeting of world leaders, business leaders and civil society. The day-long event at the UN headquarters will see world leaders and business leaders attending various sessions. The summit will focus on “tangible” climate actions. After the opening ceremony, there will be plenary sessions, during which heads of states and governments are expected to announce new national actions and ambitions to mitigate climate change. A “private sector forum” lunch will focus on carbon pricing and will also include discussions and announcements of new commitments and actions by private and public actors. Afternoon sessions will see new initiatives being announced by coalitions of governments, businesses, and civil society organisations. Thematic sessions that will also be held in the afternoon will focus on policy and practices in critical areas of climate action.

What does the summit hope to achieve?

The climate summit has three big ticket items—emissions reductions across the board (by developed and developing countries), financial assistance and future negotiating process. The potential outcome is likely to be neither a declaration nor an accord; actions and platitudes will be merely “noted”.

So, is this summit merely about cementing of positive noises? The least it can aspire to achieve is aid preparation of a clear roadmap to save the negotiations from an imminent impasse at the Conference of Parties (COP) in Lima in December this year and Paris in December 2015. This modest action can ease the way for the negotiations to pull the states away from rhetoric and blame games and agree to at least a bare agreement that could capture the spirit and the ambition of this summit and future negotiations.

This summit can serve as a catalyst and mobilise all the countries that want legally binding commitments to campaign for it. The voice of the vulnerable nations, such as the small island developing states (SIDS) and the African nations, will prove to be significant at these talks. The boldest step, and an achievable one at that, would be to have all countries to agree to translate their intended national commitments into national laws.

It is hoped that the focus of the sessions and the agenda would remain on agreeing to a cap on emissions while allowing the developing nations some elbow room in terms of how much emissions they can be permitted keeping in mind their developmental needs, non-availability of green solutions and their energy needs.

The story so far

Under the original treaty, the United Nations Framework Convention on Climate Change, governments decided to work collectively to "stabilize greenhouse gas concentrations in the atmosphere at a level that would prevent dangerous anthropogenic interference with the climate system". Broadly speaking, countries recognised the urgent need to contain climate change, but they didn't quite say what that entailed. Details were missing, and in the years since, negotiators have been meeting continually to haggle over the details.

At the 19th Conference of the Parties to the UNFCCC (COP 19) in Warsaw in 2013, the parties were invited to communicate their “intended nationally determined contributions” to a 2015 agreement well in advance of COP 21 (Paris 2015)—for those “ready to do so”, the deadline was the first quarter of 2015.

There have been numerous meetings in recent weeks to prepare for the upcoming COP at Lima. At the BASIC meeting in New Delhi last month countries reaffirmed their stand with regard to “common but differentiated responsibilities and respective capacities (CBDR-RC)”. The Small Island Nations gathering, BRICS’ (Brazil, Russia, India, China and South Africa) new US$100 billion development bank and emergency reserve fund, the Petersberg Climate Dialogue where negotiations were said to be “on the right track”, claims of convergence of ideas and a list of deliverables for the UN climate talks in Lima this December, all show signs of international efforts to amp up the climate talks as a final push to Paris 2015.

Absentees at the summit

Chinese President Xi Jinping and Indian Prime Minister Narendra Modi announced that they would not attend the summit. In the absence of meaningful participation of two of the top three emitters of greenhouse gases, the global talks on climate change will be stymied. India will be sending Prakash Javadekar, the minister of state for environment, forests and climate change. China will be sending vice-premier Zhang Gaoli. A recently released UN document, ahead of the meeting, shows that the leaders will be given speaking slots of just four minutes each.

German chancellor Angela Merkel announced earlier that she would not be attending this high level event. This renders suspect Germany’s commitment to offer substantial emissions cuts, although Germany has pledged US $ 1 billion to the Green Climate Fund (GCF). Others like Australia, Canada and Russia, too, have expressed their scepticism about the meeting’s outcome and are sending their foreign or environment ministers. Saudi Arabia, which relies heavily on its oil exports to sustain economy, will send its petroleum minister to the meet.

The Modi-led government which came to power in May has so far indicated that environment is not a priority for it. It is intriguing that Modi is going to give this high level meet a miss and at the same time attend the UN General Assembly a couple days later in New York. According to an environment ministry official, India, in the allocated 4 minutes, is set to highlight the voluntary actions it has taken to combat climate change. But the question is will an announcement of the ministry be that relevant given that in India, as also in most countries, environment ministries are often overruled by external affairs, commerce or finance ministries when it comes to agreeing to ambitious international commitments.

The lack of positive results at negotiations so far can also be attributed to the reluctance of the rich countries, that pushed the world to the brink of the climate crisis in the first place, to put sufficient money on the table (in fact, they are now asking developing countries to inject money in the Green Climate Fund or GCF, which was proposed at Cancun and is not yet operational). Climate finance is expected to inject up to US $100 billion a year by 2020 in clean technology and low carbon growth. However, estimates have identified the actual financial requirement for low-carbon development and clean energy investment at over US$ 700 billion a year and possibly more than US$1 trillion a year.

For those more optimistic about the climate summit, this is a chance to generate a consensus ahead of the tough and intense negotiations to close a deal in 2015 at Paris. However, there is no international mechanism to seek compliance and enforcement of “international and legally binding” agreements. No country till date has been penalised for not implementing a promised reduction of greenhouse gas emissions or rate of deforestation. So far, such a vision for the future of climate talks is just a pipe dream given the fuzziness surrounding the following points:

Other issues like the updating and reviewing commitments, transparency and accountability, carbon markets, land use, land-use change and forestry (LULUCF) and reducing emissions from deforestation and forest degradation (REDD) will need to be addressed. Given the duration and informal nature of the summit such core issues are beyond the realm of this climate summit.

However, it would not be right to reject the entire process and its significance. This high level dialogue has been started with a spirit of goodwill between nations with vastly different developmental paths. What’s more, given the lethargy over the current climate talks, any political tool that has broad support at the highest level can be craftily used in climate negotiations.

But one cannot hope governments to do it all by themselves. Other non-state actors must act in order to guarantee that the level of ambition and overarching design of the new agreement is consistent with the globally agreed target of containing mean average global temperature rise to than 2°C. Running parallel to the Climate Summit, during The Climate Week, various non-profits will host events in New York. This “alternative summit” will see workshops, panel exhibits, meet-ups, speeches and performances happening all around Lower Manhattan.

Time to act is now

A recent analysis by MIT researchers made a realistic assessment of the status quo of countries based on emissions pledges. Their findings: the 2015 pledges would fall short of the cuts needed to stay below 2°C of global warming.

The global concentration of carbon dioxide in the atmosphere – the primary driver of climate change – has reached 400 parts per million (ppm) for the first time in history. The latest IPCC report says between the start of the industrial revolution and 2011, carbon dioxide emissions from human activity added about 531 billion tonnes worth of carbon to the atmosphere. To stay within the 2°C, the budget for carbon dioxide emissions is calculated at less than 1,000 billion tonnes.

Scientific warnings are a constant reminder that the world is moving towards 450ppm CO2 concentration, and the current developmental paths show little or no signs of slowing down the process. The challenge is not to lose heart but build on the momentum of climate talks like the one at present. No one can deny that the global actions and campaigns that have seen contributions from governments, non-profits and even businesses, have indeed achieved a lot since the inception of the treaty in 1992. Such level of mobilisation of action would not have been possible without the UN processes and mechanisms to engage so many countries and obtain emissions reduction targets from them.

Atmospheric circulation as a source of uncertainty in climate change projections