Get the focus on environment and health, Mr Prime Minister 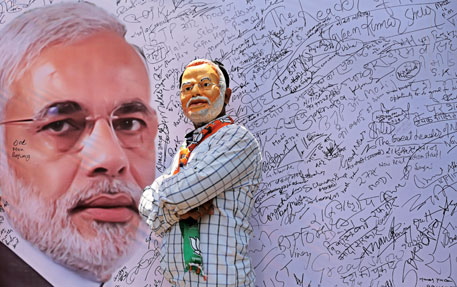 EVERY NEW GOVERNMENT comes with baggage and opportunity. The problem is since the government is new, it wants to undo what has been done in the past, make new schemes and start again on the learning curve. The opportunity is that there is a new drive to do more, to deliver and to push for change.

Keeping these two facts in mind, we are presenting the Environment and Development Agenda for the BJP government that took charge on May 26, 2014, ahead of the World Environment Day.

First, what we do not want the new government to do. One, in the name of development it must not brush aside the idea that the environment, forest and wildlife concerns are critical. This does not mean we believe the current environment and forest clearance system is working. We want a drastic reform of the system so that it works for environmental protection. This requires reducing multiplicity of clearances, removing archaic laws and strengthening regulatory processes. The new government must not be bullied by the Supreme Court into creating an additional environmental regulator. This will only add to the institutional mess.

Two, we do not want the new government to discard old schemes which were introduced for inclusive growth. All the schemes for rural employment, water and sanitation, housing, nutrition and education are crucial. Without these, there is no idea of India.

But again, we want a change. We want delivery so that people have access to clean water, sanitation, employment, food and education. We have lost too much time making schemes on paper and then fiddling to make them even better, without ever focusing on delivery.

It is our belief that delivery requires good old-fashioned governance systems, which need constant monitoring and attention to detail. The delivery of schemes does require states to get more autonomy and control over funds and programme design. In the current system the Centre makes the plan, provides the money, but it is the state that has to operationalise the system of implementation. There is a huge disconnect. It is the state chief minister who should be accountable for delivery; it is he or she who should get the brickbats or the credit.

The new prime minister has famously and rightly said that toilets are more important than temples. This is the real agenda for the new government.

JUST AS the Bharatiya Janata Party was getting ready to form the new government, India hit an all time low on the WHO list of polluted cities. Its report, released in May, noted that 13 of the 20 worst polluted cities across the world are in India. Air pollution has also emerged as the fifth largest killer in the country. Though shocking, the findings do not come as a surprise.

Indian cities are bursting at the seams with cars, two-wheelers and a large number of diesel-powered vehicles that belch toxic fumes. At the same time, the share of public transport, walking and cycling is drastically declining. Worsening air pollution has also exacted a significant toll on the country’s economy. A recent estimate by the World Bank shows that the health cost of particulate matter pollution (particulate matter less than 10 microns, or PM10, can penetrate deep into the lungs) accounts for 3 per cent of the country’s GDP. Clearly, the new government faces a daunting task of curbing air pollution. It will be able to turn the tide only with hard decisions and determination. Here are a few words of advice:

per cent of Indian cities are critically polluted. The level of particles with a diameter of less than 10 microns (PM10), which go deep inside the lungs, is 1.5 times above the national standard 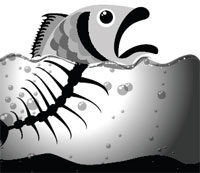 THE BJP-LED government has said it is serious about cleaning the Ganga. It must know that every river in India is like the Ganga. Every river is either dying or already dead. This is because cities take water from them and return sewage, and industries discharge effluents into them.

The river-cleaning model has as yet depended on building sewage treatment plants. This strategy is inadequate. Nearly 84 per cent of Varanasi city is without the sewage network. So is 71 per cent of Allahabad. Engineers will tell the government that they will build the network. This is a pipe dream. Even as they deal with the backlog, there is more that needs to be built or repaired. Cities do not even have funds to run sewage treatment plants. All in all, the game of catch-up does not work. Change is possible with the following strategy:

India needs to reinvent the way it manages green clearances 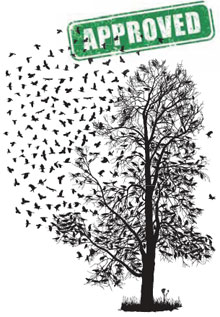 ON MAY 16, as India was anticipating a new government the stock market hit a record high. The unbridled optimism of industry that the BJP-led government will rev up the economy is apparent. The Associated Chambers of Commerce and Industry of India has already prepared an agenda for the new government to achieve 10 per cent economic growth. Chandrajit Banerjee, director-general of the Confede- ration of Indian Industry, indicated in an article that the government should re-start stalled projects.

Industry lobby portrays green clearances as impediments to growth. But facts wspeak otherwise. The government had planned to increase the country’s thermal power capacity by 78,700 MW during the 11th Five Year Plan that ended in 2012, but only 53,000 MW was installed. This is when the Union Ministry of Environment and Forests (MoEF) cleared plants of 217,794 MW. The 12th Plan, ending 2017, promises another 88,000 MW to cater to the future demand. While the target can be met without further clearances, MoEF has cleared an additional 36,000 MW since April 2012.

Similar is the case with coal. India’s current production of coal is 557.7 million tonnes per annum (MTPA). By 2017, coal demand will rise to 980.50 MT, which can be met by realising the 589 MTPA potential of mines cleared during the 11th Plan period. Yet MoEF has cleared additional 67 projects with capacity of 216 MTPA since 2012.

The fact is very few projects get rejected on environmental grounds. In fact, projects are cleared with full knowledge that the government has little capacity to monitor whether developers are complying with environment clearance conditions. This allows developers to pollute. Protests against such projects make clearances contentious. This affects industries. Clearly, the current system is not working. The new government must reform and strengthen the environment management system and green clearances to safeguard people’s concerns.

per cent of projects manage to get environment-related clearance; 94% get forest clearance

Harness the development potential of the Forest Rights Act 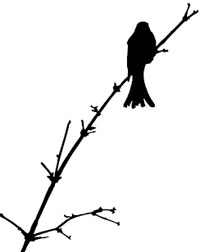 WHEN THE FOREST Rights Act (FRA) was enacted in 2006 it was supposed to reform the forest regime that continued since the colonial era and denied tribals and other forest-dwelling communities the rights over their ancestral land and forest resources. Ensuring livelihood and food security of the poorest of the poor is at the core of this legislation. Seven years on, the Act is yet to live up to expectations.

People’s anguish became clear during this general election when the ruling Congress party at the Centre faced rout in most tribal constituencies that had been its traditional strongholds. Political analysts lay the blame for the debacle of the Congress-led United Progressive Alliance government on its inability to tap FRA’ s development potential. The new government must implement FRA in letter and spirit and include it in its key development agenda if it wants to continue attracting tribal votes. 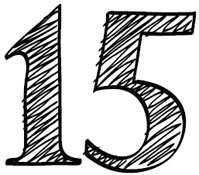 This is a must to ensure energy access and energy security 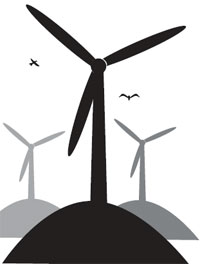 INDIA IS SUFFERING from acute energy poverty. Per capita electricity consumption of the country is one of the lowest in the world with 778 kiloWatt-hour (kWh) per year against the global average of 2,600 kWh per year. About 306 million people, mostly those in rural areas, do not have access to electricity. Worse, 818 million people depend on traditional biomass for cooking. In 2013, India ranked 136th on the human development index of UNDP.

Clearly, energy access issues need to be urgently addressed. While doing so India needs to be cautious as it is vulnerable to climate change impacts. At present, coal-based power generation is the largest source of carbon emissions in the country. These emissions will increase significantly if the growing number of coal-fired power stations are not checked.

The country’s dependency on hydro carbon-based fuel is also increasing by the year. At present, it meets 30 per cent of the primary energy requirement through imports. The new government must strike a balance between energy security and its impact on health and climate.

kWh/yr is the per capita energy consumption of India. By contrast, global average is 2,600 kWh/yr

Programmes for rural development are in place. Ensure they reach each of the intended beneficiaries

THE NEW GOVERNMENT has two tough challenges in the rural development sector. The first challenge is to match the United Progressive Alliance’s (UPA’s) rural development budget of more than one lakh crore rupees a year. The second is to fix the shortcomings in the delivery of development benefits to the right people. Deficiencies in delivery in many ways spelt the doom for UPA despite its unequivocal focus on rural budget. Prime Minister Narendra Modi, feted for his impeccable delivery skill, will be closely monitored on this agenda. The three steps he must take:

million people are supposed to benefit from rural development programmes. But, according to government estimate, 50 per cent do not get the earmarked benefits

Economic growth is possible only if people are healthy. Disease prevention should, therefore, be the mantra of development 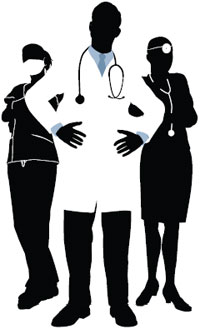 MODI'S MANTRA of development was crucial in the victory of Bharatiya Janata Party in the 2014 Lok Sabha elections. But careless development could cost people their health. This significantly hampers economic growth.

Many times, diseases kill people in the prime of their working lives. Economic impact of these deaths is high. A WHO estimate suggests that India could lose between $23 billion and $53 billion a year in national income due to deaths from heart diseases, strokes and diabetes between 2005 and 2015. There is no estimate for losses due to communicable diseases.

Despite the growing burden of diseases, the United Progressive Alliance government allocated a meagre 1.3 per cent of the GDP for healthcare in the 12th Plan. The new government will have to increase the budget. But it should not focus only on curative care.

Prevention of diseases will, however, be a challenge for the government. For example, to prevent exposure to chemicals in food products the government will have to check the use of colourants, artificial sweeteners and trans fats. This will significantly affect the food industry, which uses the additives to lure customers. Similarly, to protect people from harmful impacts of particulate matter pollution in the air, the government will have to limit private cars and promote public transport that run on clean fuel.

Healthcare has been one of the most neglected aspects of governance in India since Independence.

As BJP starts its innings at the Centre, it must heed a few words of advice.