Why the world should plan for historic African population boom

The Western world witnessed a baby boom post World War II. Now Africa, the world's second most populous continent, is set for a demographic boom of unprecedented scale. Its population will double in just 35 years to 2.4 billion in 2050, and is projected to eventually hit 4.2 billion by 2100. The continent's population growth is the subject of UNICEF's new report—Generation 2030/Africa Report, released recently 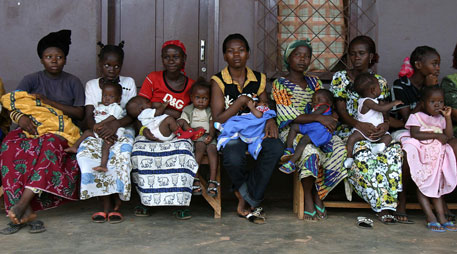 Demographics are becoming a key reason for Africa’s increasing centrality to the global development and growth agenda. The projections by the United Nations Population Division, titled “World population prospects: the 2012 revision - key findings and advance tables”, released last June  indicate a sharp increase in Africa’s inhabitants through the rest of the century, even as population growth rates continue to slow. Africa's population will double in just 35 years to 2.4 billion in 2050, and is projected to eventually hit 4.2 billion by 2100.

Why Africa, already the world’s second most populous continent with over 1 billion inhabitants, will experience this demographic shift, unprecedented in its scale and swiftness, and how will this affect Africa and the rest of the world is the focus of the new report, Generation 2030/Africa Report, released by UNICEF at Johannesburg earlier this month.

This report prepared by Danzhen You, Lucia Hug and David Anthony, Division of Data, Research, and Policy at UNICEF headquarters, is based on the estimates released by the UN Population Division. It is the second in the UNICEF series on child demographics, after “Generation 2025 and beyond: The critical importance of understanding demographic trends for children of the 21st century”, released in November 2012, which, too, had reported about the massive shift in the world’s child population towards Africa in recent decades.

What drives this projected population boom?

According to this report, the two main driving forces behind Africa’s surge in births and children are –continued high fertility rates and rising numbers of women of reproductive age. Each African woman on average will have 4.7 children in 2010-2015 — far above the global average of 2.5. A decline in the child mortality with improved child survival rate is also among the main reasons for this, finds this report. (See 'What is leading to Africa’s baby boom?') The report expresses concern that conflict and fragility continue to undermine human rights and social and economic progress in a number of African countries and shows the relationship between conflicts, poverty and continued growth in African population.

While referring to three distinct reports on fragile countries across the world, the report emphasises on an OECD report that says that two-third of fragile states are now found in Sub-Saharan Africa, West Asia and North Africa and calls for special attention to Nigeria which will account for almost one in 10 births globally by 2050.

(See 'By 2015, Nigeria will account for one-fifth of all births in Africa')

As the world comes together to set a new 15-year agenda for the international development community after the deadline for the Millennium Development Goals expires in 2015, this well-timed analysis by UNICEF raises policy issues that will foster debate and discussion and influence decisions in the coming years.

It demands a greater attention to this unprecedented demographic shift in Africa because by the time the goals of the post-2015 agenda are due to be completed in 2030, the “generation 2030” in the continent will consist of 164 million children more in addition to its already burgeoning child population, with 40 million more under-5 kids and almost 100 million more adolescents.

This upswing in population presents both an opportunity and a challenge, to craft a child-focused investment strategy that enables the continent, and the world, to reap the benefits of Africa’s demographic transition. This is the key message of the UNICEF new report.

An exclusive section in the report focuses on the policy and calls for investments in expanded and improved healthcare, education and protection and participation mechanisms to transform the continent, breaking the centuries old cycle of poverty and inequity. It calls for a major investment in the human capital. Supporting Africa’s poor families to do this for their children will be paramount if Africa is to take full advantage of its demographic transition in the coming decade.

The report demands for a suitable investment in children, prioritising the poorest and most disadvantaged in the coming decades and warns that unless investment in the continent’s children is prioritised, the sheer burden of population expansion has the potential to undermine attempts to eradicate poverty through economic growth. Worse, it could result in rising poverty and marginalisation of many if economic growth were to falter.

The key recommendations of the report also include investments in girls and women, especially in reproductive health, education, and preventing child marriage to overcome the cultural, social, economic and political barriers that perpetuate the disempowerment of women. UNICEF has suggested involvement at national level and categorically stated that the national development planning and systems strengthening must be adapted and sharpened to prepare for these demographic shifts.

What is the way ahead?

This comprehensive review of African demographic trends undoubtedly has important implications for the global, regional and national actions to help realise the rights of all the continents' children in the 21st century and foster inclusive and sustainable development. The report calls for a national and international discourse to ensure that Africa's children finally realise all of their rights.

This report will now be utilised to seek African response to the nations' demographic challenges, said Anthony in his interview to CNBC Africa. (Watch this interview). 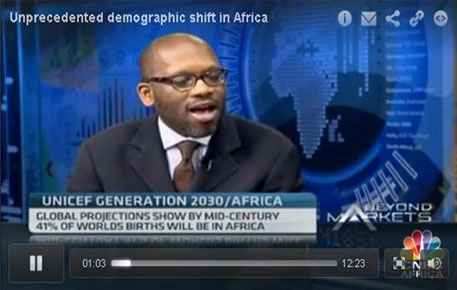 He also called upon the African government to plan for substantial investment in the children and youth of this continent to benefit from a potential demographic dividend. The team will also work on using this report to deepen the dialogue and the engagement with key national, regional and international stake holders, said Anthony.

How does this concern the world, specially India?

The United States is determined to be a partner in Africa's success is “a good partner, an equal partner, and a partner for the long term”, said US President Barack Obama in a speech, as reported by Reuters in a newsreport on August 6, 2014. (See also, remarks by the president at the US-Africa Business Forum) African leaders, too, agreed to this historical partnership worth an estimated $85 billion a year in trade flows, as US business leaders eyed opportunities in the region, home to six of the world's 10 fastest-growing economies - even if they might be late to the party.

The World Investment Report 2014, too, reveals an encouraging trend in global foreign direct investments in Africa in 2013 with growth expected to continue in the years to come.

India is to host the Third India-Africa Forum Summit (IAFS-III) in December 2014 and the development cooperation with Africa under the rubric of IAFS entails various projects and programmes. Undoubtedly, India needs to keep in mind the projected socio-economic demands foreseen to the population boom projected for Africa by UNICEF. 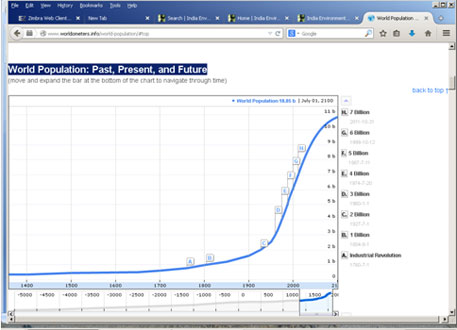